The Guangdong Six and the rule of law (of value): Theses on the December 3 crackdown 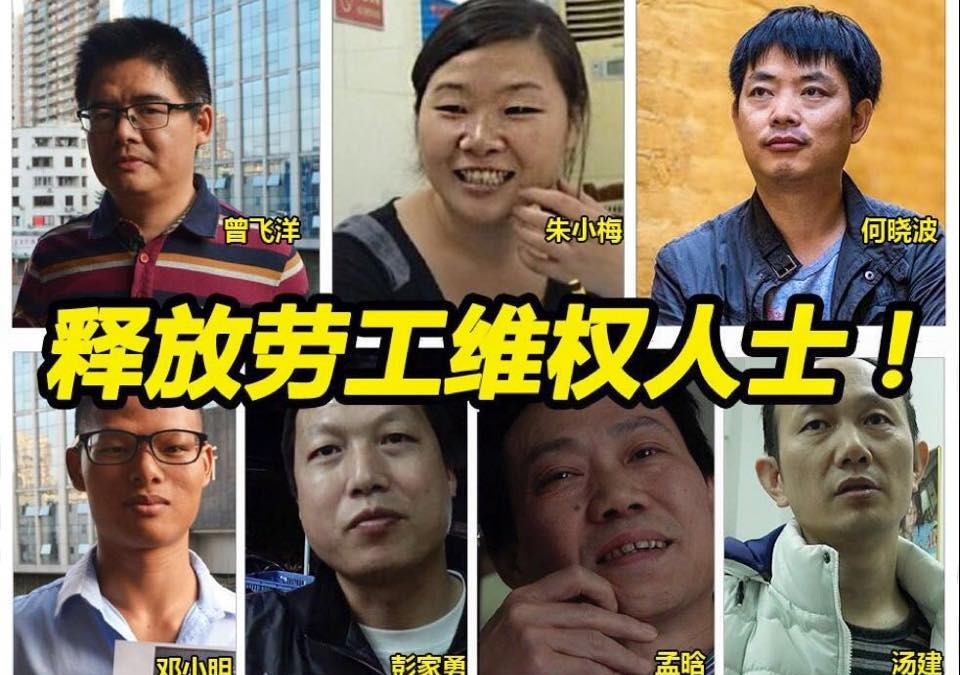 Information about the December 3 crackdown on Chinese labor activists is now widely available in English and several other languages, but there has been little satisfactory analysis of its significance—in relation to business as usual in China, to comparable situations in other countries, or to workers’ struggles as such. Comrades from various parts of the world have been asking similar questions, such as: why should we focus on supporting “reformist NGO staff” when workers and peasants are regularly arrested, beaten and sometimes killed for participation in forms of resistance more likely to improve their conditions or lead to more transformative movements? Also, how could we support these detainees in ways that might hasten their release, affect the legal precedent being set by this crackdown, or increase international solidarity among workers—as opposed to the merely symbolic actions proposed so far? In response to such questions, we wrote the following theses, which we may develop into a more coherent statement after receiving feedback from comrades in China and elsewhere.1

On December 3 and the following days, five worker-support organizations were raided, and at least 40 of their staff, affiliated workers and family members were taken in for questioning. At present, seven remain in state custody, six confirmed as facing criminal charges which could result in lengthy prison sentences, setting a legal precedent for more intense repression in the future.2

All but one (Zeng Feiyang) of the six activists confirmed as criminal detainees started out as migrant workers, and either founded or became active in these organizations after being involved in their own struggles. All five of these organizations have focused on supporting workers’ collective and/or individual resistance, increasingly touching on “political” issues (not merely “economic”), in the sense that some of the actions they supported targeted not just individual private employers, but also the state (e.g. struggles regarding social insurance, and the outsourcing arrangements of local state services such as sanitation). The Chinese state has tended to regard the latter “political” struggles as more threatening than the former “economic” struggles focused on wage demands and targeting individual private employers, as indicated by the focus of repressive measures since 2012 and the direction of policy reforms.3

At least three of these organizations have received some state support for certain of their activities (framed as “social work”) in the past (like many such NGO-type organizations), but they have also been targeted as objects of investigation and repression. While the December 3 crackdown is the latest in a series of suppressions of workers’ resistance and other oppositional social forces (conventionally labeled as “civil society”) that has increased since 2012, this repression must be understood as part of a dual strategy also attempting to integrate some of those oppositional forces, and to channel popular discontent into institutions it can control, such as the ACFTU (All- China Federation of Trade Unions) and affiliated “social work” centers.4

A few months ago, the Chinese stock market crashed, signaling problems of growth and restructuring in the real economy. Although the size of the Chinese stock market is small compared to GDP, stocks and the financial market play a key role in the transition from an export- and investment-driven economy to one more driven by internal consumption.5 According to China Labor Bulletin, the number of recorded strikes in China nearly doubled from 1,379 in 2014 to 2,741 in 2015, with those in Guangdong doubling between July and November of this year: “The vast majority of the Guangdong incidents occurred in the manufacturing sector with workers demanding payment of wages in arrears etc. after factory closures, mergers and relocations. In many of these cases, workers marched on local government buildings to demand restitution after the boss vanished. […] Police were deployed in nearly half of the 75 factory worker protests in Guangdong over the last two months and arrests were made in nine cases.”6

Recent examples of “democratic” countries adopting comparable authoritarian responses to popular unrest range from the 43 murdered Mexican students to the 1,100 killings by US police in 2015—a figure which has only grown since the protests in Ferguson began. More directly comparable to China’s crackdown on labor activists is the recent charging of South Korea’s union federation leader with “subversion.” This was in response to protests against state reforms of the labor law, and against the rewriting of history schoolbooks attempting to whitewash Korea’s history of state repression and popular resistance. Meanwhile, in response to the Euro-crisis and struggles in Greece, the EU has imposed a technocratic redefinition of “democracy” itself. And in the historical heartland of liberal democracy, the UK is preparing a new set of laws dismantling traditional rights of workers to strike and operate through unions. As in China, these governments’ responses have occurred in the context of tightening economic conditions, making it difficult for them to simply buy consent from the protesters. Although politics should not be oversimplified as merely a deterministic reaction to economic developments, general economic and social conditions set the frame to which politics must adapt sooner or later.

At least two of the criminally charged activists, Zeng Feiyang and Peng Jiayong, were beaten up by unidentified thugs earlier this year. Those behind these attacks got away with it, and would do so again if they were to repeat this kind of extra-legal repression, as has been common in China and elsewhere since time immemorial. We thus regard it as significant and necessary to explain why the state has now bothered to conduct extensive investigations into these activists in order to build legal cases against them. The reasons behind this may include the activists’ refusal to stop their workers-support activities after being beaten up, or the state’s desire to create a highly visible precedent, sending out a loud and clear message that certain forms of labor activism are illegal—or may run the risk of being treated as such. In any case, it is important to mark the difference between these legal charges and the mere hiring of thugs.

This interpretation is reinforced by the smear campaign against the detainees, focusing on Zeng Feiyang, launched by state media on December 22.7 This is an extremely rare occasion that state television has reported so prominently about labor NGOs in any context. Many people have responded to this campaign critically on social media, leading to the blocking of WeChat posts and even accounts. While these popular reactions are unpredictable, the campaign itself supports the interpretation that certain actors in the state want to use this as a highly visible warning case.

Labor NGOs have been criticized for channeling workers’ unrest into legal and solvable wage negotiations and other pacified forms to integrate workers. Although this critique may be valid in some contexts, we want to highlight the difference between a critique from below and one from above. State repression against workers’ organizations, labor NGOs and trade unions is not the same as when workers refuse to let professional activists represent themselves in bargaining or decision-making.

Since the state has been using all kinds of legal and extra-legal repression against workers’ unrest and labor organization without successfully suppressing strikes, it remains speculative as to whether this crackdown will have a lasting effect of discouragement on workers.

The campaign as well as many supporting articles and petitions have largely been framed as a contest between NGO “rights” and the authoritarian abuse of law, rather than about workers’ struggles. In contrast to the Foxconn campaign, which treated workers as mere victims, supporters could recognize these detainees as militant workers supporting other workers’ collective struggles. The methods employed by the campaign have so far been symbolic, such as petitions, photos and non-disruptive demonstrations – nothing that seems likely to pressure the Chinese state to release the detainees or reverse their cases’ legal precedent in the class struggle. In contrast, this campaign presents the glimmer of a possibility for workers in China and elsewhere to coordinate mutual support across borders, and to discuss the international division of labor.