Gender War & Social Stability in Xi’s China: Interview with a Friend of the Women’s Day Five (1st half) 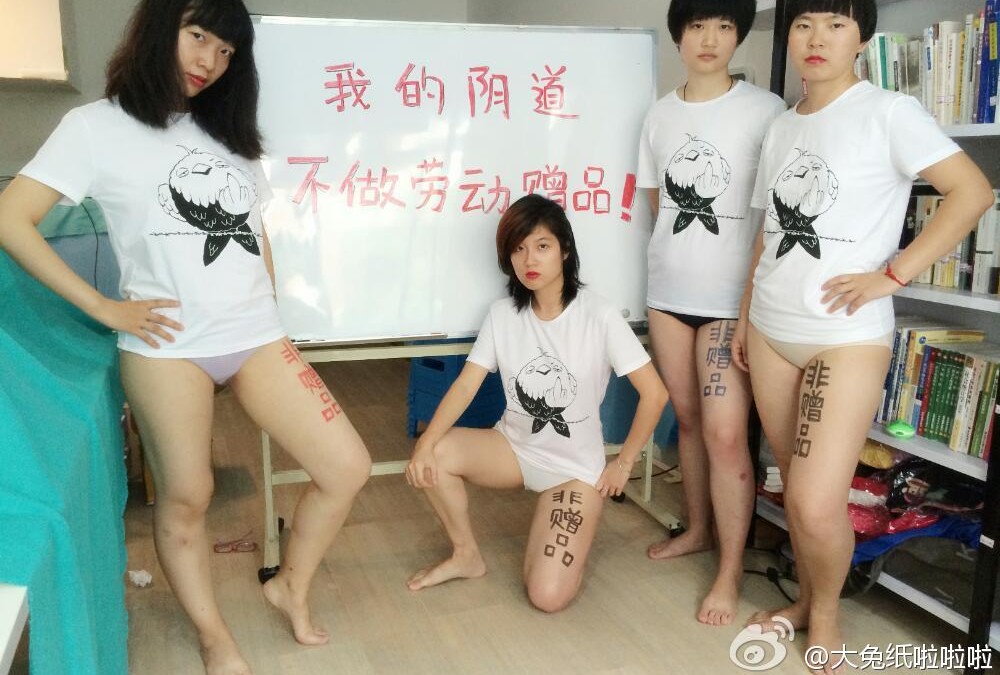 Many friends and associates of the five feminists detained on March 7 are still in hiding, but one was willing to meet for an interview on March 16. She thinks the best we can do to support the prisoners and their cause is to spread awareness of their situation in China and abroad. The fact of their detainment has been widely reported in the international media, and the EU and USA have made official statements,1 but so far little analysis has been offered, so this interview focuses on questions such as: what is unique about this case? Why were these individuals targeted? Why, in the Xi regime’s crackdown on civil society in general, does it seem especially afraid of feminism?

Chuang: You said that every year during the “Two Sessions”2 some people are detained (抓), but you never expected it to happen to [these women]. Because the action [they had planned]3 didn’t seem very threatening?

Anon: Actually I don’t think it’s even related to the action itself. Every year during the Two Sessions… it’s as if the government is expressing some kind of will [意愿] by detaining people. It’s not [targeted] at which [particular] action is done at that time, but at the combination of many actions done at other times that attracts attention, that makes [the authorities] think they should be detained. But these five people all basically do gender equality [work]. Along with a couple other things — for example Wang Man is interested in poor people, and Wei Tingting is interested in bisexuality… But mainly what they do is [promote] gender equality. In China, “male-female equality” is a basic national policy! [laughs] All along they’ve been calling [their work] “popularizing the law” [普法]: “Our country has this law, here are the details, everybody can use this law to protect themselves…” They’ve never said they were going to oppose some law or something. And their actions have always been rather moderate [温和]. They rarely go organize protests. Most of what they do is training workshops for women, LGBT groups, etc. Or go to the street and do performance art. All rather innocuous things. So it’s hard to believe that they would be the ones to get detained. I always thought that HIV [activists] would be detained before gender equality people.4

C: One analysis is that this is related to the feminist petition to cancel CCTV’s Spring Festival Gala.5 What do you think?

A: There’s definitely some relation, but I don’t think it’s as big as [some] imagine. It’s occurred to me before that some gender equality people would get arrested during Xi’s Jinping’s administration. Because in 2013, when Xi had just assumed office, at that time I was in Guangzhou with [some of the people now being detained] organizing a training workshop for college students, also related to gender equality. That was the most difficult [狼狈] workshop I’ve ever done. We had arranged to do it in a hotel. We had 30-some people, and as soon as we tried to enter, we were kicked out. So we tried three other hotels. None were willing to let us in… And this was very similar to the present situation: all the students from Guangdong were phoned by their fudaoyuan [political counselors]6, who told them [not to participate], and five or six actually [decided not to participate], and afterwards the school kept [harassing] them. And at the time the Guobao [secret police]7 followed us around all day… So already at that time it occurred to us that Xi’s assumption of office might be a disaster for gender equality.

C: At the time I asked someone about this, and she thought it wasn’t that the authorities were specifically targeting the topic of gender equality, so much as it was part of a general crackdown on civil society. You disagree?

A: For [several] years now [the NGO that organized that workshop] has organized at least ten workshops every year, most unrelated to gender, and that was the one they chose to suppress… LGBT-related activities have also been targeted, especially in Beijing. Last year around June 48, at least twenty LGBT-related events were forced to be canceled…. Even watching films together wasn’t allowed.

C: Were all these events organized by the same people?

A: No. [lists several groups that organized different events; all the events had in common was their focus on LGBT-related issues…] Now in NGO circles, people say “Oh you work on LGBT issues, so you’re [politically] sensitive [i.e. at risk].” That’s what my colleagues say. It’s scary…

C: So you think the Xi administration’s crackdown on civil society is especially targeting both LGBT and feminist activities?

A: Yes. Ever since he assumed office, Xi has been emphasizing “traditional Chinese family values.” So we can see that Peng Liyuan [Xi’s wife], who was an extremely successful artist, but ever since Xi assumed office, the image of her as a housewife repeatedly appears in the media. Same thing goes for CCTV’s Spring Festival Gala: it continually emphasized “family, family, family…”

C: I heard that shortly after Xi assumed office, he gave a speech praising traditional womanhood, or something like that?

A: Yes, and he said something similar recently, I just read today. I’ll look it up and send it to you9…

C: What was the gist?

A: Basically that [we] should abide by [坚守] traditional Chinese culture, that women should put their natural work to good use in the home [女性要在家庭中发挥她的本质工作]… put their value into play [发挥她的价值].

A: Housework of course! [laughs]

C: He used that term?

C: That’s interesting, because it immediately links gender to labor. You know, one analysis of why there has been a global resurgence of patriarchy over the past few years, renewed efforts to push women back into the home, is that this is related to capitalist crisis: that capital can no longer absorb so much labor through the wage relation, so it deals with the “surplus population” by pushing people back into unwaged forms of labor, such as housework. Do you think that makes sense for China?

A: I’m not sure… I don’t think we can analyze this without mentioning the “boys’ crisis” [男孩儿危机] that everyone’s been talking about for the past few years. [laughs] They think that females’ gradual advancement in school, work, etc., constitutes a “crisis” for boys.

C: Because they think if women want to pursue their own careers instead of getting married, that makes it harder for men to find wives?

A: That’s one aspect. Also they simply think that it’s abnormal for women to be more successful than men. For example, the college entrance exams: now among college entrants, girls have gradually gotten up to 51%. From the minute the 50% line was crossed, many education authorities [教育学家] started saying: no. This means that our education system has problems. We’re being too good to girls…

Likewise in the CPPCC, to this day there’s not a single woman. In the National People’s Congress, women make up only 20-some percent of the members. Yet they’ve already started to say that too many women are participating in politics.

C: Who says that?

A: Just look in the news. Many members of the CPPCC have openly said that this is a problem. Similarly, in 2013 or 2014 one member of the CPPCC, surnamed Luo, said that women should not go to graduate school. And he is a university professor himself, a doctoral advisor! It’s terrifying.

A: He thinks that if women go to graduate school, men won’t want them! They won’t be able to get married.

C: Sounds more like an old-fashioned father than a professor or a politician.

C: So this isn’t related to economic factors? Is there a question of women’s competition with men for jobs? Because that seems to be part of the issue in other countries where women have been under attack.

A: I think there’s a difference. First of all, China has never discouraged women from working [outside the home], because the government never allows labor-power to be wasted. China is trying to maintain rapid economic growth, it needs to use all the labor-power at its disposal, so it never tells women not to work [outside the home].

C: So they’re told to work both outside and inside the home.

A: Yes, and also that their wages/ salary be lower than men.

C: Why do government officials care about this?

A: Well… If women’s status got higher than that of men, where could men vent their anger [发泄]? When outside [the home] a man receives heavy stress, he needs some way to relieve it, otherwise he’d start thinking “I want [political] reform, I want revolution, I want to overthrow the government,” etc. [laughs] If not, then he needs another outlet. And right now the outlet is to push all the housework onto the woman. And if you get angry you can resort to domestic violence. If you beat your wife, no problem, no one will punish you… It may be a way to maintain social stability. If I want a country to be stable, to have less riots [暴乱], we know that if [people] want to have reform, men may be a relatively neutral force [?? – 中间的力量]. It’s more difficult for women to foment a riot. If you want to avoid that kind of riot, just redirect men’s stress onto women. This is an easy way for a state to maintain a semblance of stability. [Discussion of domestic violence, Li Yan…]

Read the second half of this interview here.