Women’s Day & the Feminist Five a year on 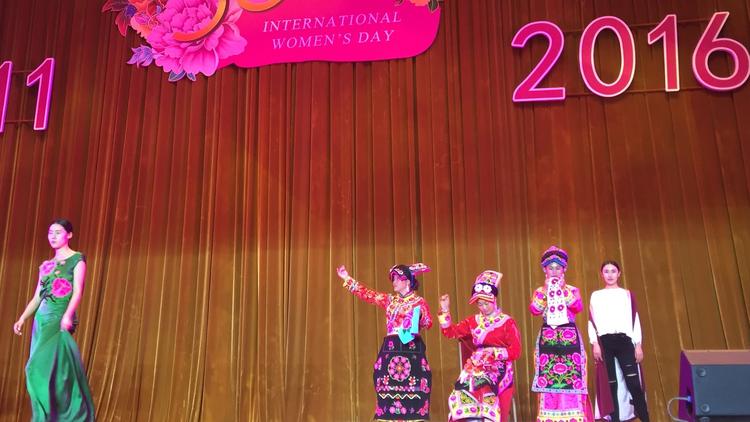 One year ago (March 7, 2015), ten women in three Chinese cities were taken into police custody for planning actions to raise awareness about sexual harassment on public transportation. Five–Li Tingting (李婷婷), Zheng Churan (郑楚然), Wei Tingting (韦婷婷), Wang Man (王曼), Wu Rongrong (武嵘嵘)–were taken to a detention center in Beijing, where they were held under criminal detention for the maximum legal period of 37 days, during which they were each interrogated between 30 and 40-some times. Wu was denied access to medication for a chronic liver condition for two weeks until she was hospitalized, and Wang was also hospitalized for heart complications after long hours of interrogation. The five were released on April 13 without charges, but remained under state surveillance as suspects of “inciting the disruption of public order” and prohibited from leaving mainland China for one year.1

This period is supposed to end next month, but their lawyers have yet to receive any official statement about the five women’s status. A few days ago, the lawyers submitted a legal opinion recommending that the case be dropped, but the only response so far has been renewed harassment by the Internal Security police and judiciary officials.

Meanwhile, although prohibited from participating in public actions, the five have continued to promote their causes in other ways. In July, Li Tingting (better known as Li Maizi) staged a wedding with her legally-unrecognized female partner, and the wedding photos were shared widely via social media. Zheng Churan (better known as Datu–Giant Rabbit) has developed a wide following for her humorous writings and videos, published on her WeChat feed “Brain-Washing Machine” (滚筒洗脑机, WeChat ID: solidarity4ever) and broader platforms such as Groundbreaking (破土).2 Yesterday she published a long poem looking back on the past year called “Datu’s March 6: That Year, That Night” (3.6大兔那年那夜), and today she posted a video calling on women to celebrate the traditional International Women’s Day on March 8 instead of the recently-invented “Girls Day” on March 7.3

Such calls have been a popular theme on Chinese social media this year through the hashtag #反三七过三八 (“Oppose 3/7, Celebrate 3/8”), the main idea being that the invention of “Girls Day” serves to reinforce patriarchy by splitting women into “girls” and “women” (妇女), the latter term now associated specifically with middle-aged and older women, considered undesirable by men in a cultural system that has been internalized by many young Chinese women themselves over the past two decades. Related to that criticism have been reminders about the origins of Women’s Day in the historical socialist and women’s liberation movements (its date being set as March 8 after women in Petrograd initiated the February Revolution with a bread riot on that date in 1917), in contrast with the widespread belief among young people in China that March 8 is simply a second Mother’s Day. A third theme has been the progress and limitations of women’s power in China marked by the recent passing of a new law against domestic violence. Here are some examples:

妇女节：我们选择和贬义词“三八”站在一起 （Women’s Day: We choose to stand together with the derogatory term “3/8”) from 澎湃新闻 (reposted here)

三七女生节是在迎合处女情结 (Girls’ Day caters to the virgin complex) from 网易女人

12张照片告诉你她生命中最重要的事情不是女生节，而是…… (12 photos show that the most important thing in her life is not Girls’ Day, but…) from the 尖椒部落 (Pepper Tribe) WeChat feed

女生节 | 禁止以节日的名义对我性骚扰 (Girls’ Day: Don’t sexually harass me in the name of a holiday) from Groundbreaking (破土)

Below are highlights from English articles about this year’s Women’s Day and the situation of the Feminist Five:

“Before International Women’s Day, Feminist Five And Their Lawyers Are Called in by Police” by China Change (March 6):

Just before International Women’s Day on March 8, the Feminist Five activists in China, as well as their defense counsel, have been spoken to and put under pressure by police, according to friends and lawyers of the activists, communicating via social media.

On March 3, Internal Security police, the branch of the Public Security Bureau focused on internal political threats, sought out the defense lawyers of the feminist activists. They said that they knew that five lawyers had sent a legal opinion to the authorities recommending that the case against the the Feminist Five be withdrawn. Security police asked them which lawyer was in charge of that letter, what their motive was, and to which governmental departments it had been sent. […]

Officials in the judiciary also called several of the lawyers in for talks, and among the Feminist Five, some were called in by police and talked to.

Dressed as Rosie the Riveter, the icon of American women’s empowerment during World War II, Li Tingting’s raised fist in a photograph posted on Facebook on Monday signaled defiance — one year after the authorities detained her and four other Chinese feminists on the eve of International Women’s Day, causing an international uproar.

But while the women and their lawyers continue to protest the lack of resolution in the public disorder charges against them, Ms. Li welcomed a victory in a cause that feminists have advocated for more than two decades: China’s first law against domestic violence took effect on March 1.

Taken together, the two issues reflected a society where there is progress even as feminists struggle to advance women’s rights amid tightening restrictions on public advocacy. They also highlight differences between younger and older feminists who share similar goals but may differ in their approach. […]

Advocating feminism “in a mild way,” as others had for decades, had failed, and Chinese feminists needed “a more intense way” to achieve their goals, [Ms. Li] wrote on Facebook in English to explain a high-profile approach that began in 2012 and has included actions such as appearing in bloodied bridal gowns, occupying men’s toilets and wearing giant paper underpants. […]

To older feminists and lawyers who had long campaigned for legal measures against domestic violence, it was important that the “Anti-Family Violence Law” for the first time makes it possible for victims to obtain protection orders from abusers easily and quickly. On March 1, the day it took effect, the first such order was granted, to a Ms. Gu in Beijing whose husband had beaten her for 35 years, the Legal Evening News reported. […]

“Some people are saying it will create problems, for example in the education of children,” she said. Corporal punishment of children is common in China. “Some even say that we’re changing Chinese tradition! This is absurd.” […]

Some of the measures the lawyers and Ms. Li said the law should have included are those addressing sexual violence in a marriage such as rape, abusive economic control and the denial of medical treatment, “a big problem,” according to Mr. Qi.

“How does China mark Women’s Day? Hold the feminism, bring on the fashion show” by Julie Makinen, LA Times (March 7):

The All-China Women’s Federation was founded by the Communist Party in 1949 to “protect women’s rights and interests.” But sometimes, it seems to be on the lagging, rather than leading, edge of the push for equal rights and opportunities for the female sex.

It’s been criticized for, among other things, posting advice on its website urging young women to hurry up and get married before they’re 30, and warning them that “as women age, they are worth less and less, so by the time they get their M.A. or Ph.D., they are already old, like yellowed pearls.”

The group has also suggested that women ought not “make a fuss” if their husbands have affairs.

On Monday, in the midst of China’s annual legislative session in Beijing, the group threw a reception at the Great Hall of the People. As (mostly male) delegates to China’s National People’s Congress (NPC) delivered political work reports in other rooms in the massive structure on the west side of Tiananmen Square, hundreds of Chinese women and invited female foreign guests assembled in the Grand Ballroom for an hour-long gathering to mark International Women’s Day[….]

Hypothetically, the gathering might have been an ideal opportunity to engage in a serious dialogue on the fight for women’s rights in China. […] Instead, the event featured a fashion show, an acrobatic number called “Spring Flowers,” a serenade from a male opera singer, and two group dance numbers entitled “Paper-Cutting Girls” and “The Valentine’s Day for Tujia Girls” featuring performers twirling red umbrellas.

[The head of the Women’s Federation announced that, in 2015, the federation] provided entrepreneurship training for 8 million women and helped 500,000 women set up businesses. The group also launched its “Looking for the Most Beautiful Families” campaign, which encourages “more families to practice virtuous family traditions and work together to fight corruption.”Several invitees to the event, asked if they had ever heard of the “Feminist Five,” responded with blank looks. […]

Trailer of Shako Liu’s forthcoming documentary about the Feminist Five, “I Am a Feminist”