Sharing the Shame 与有耻焉：A Letter from Internationalists in China 来自中国大陆国际主义者的一封信 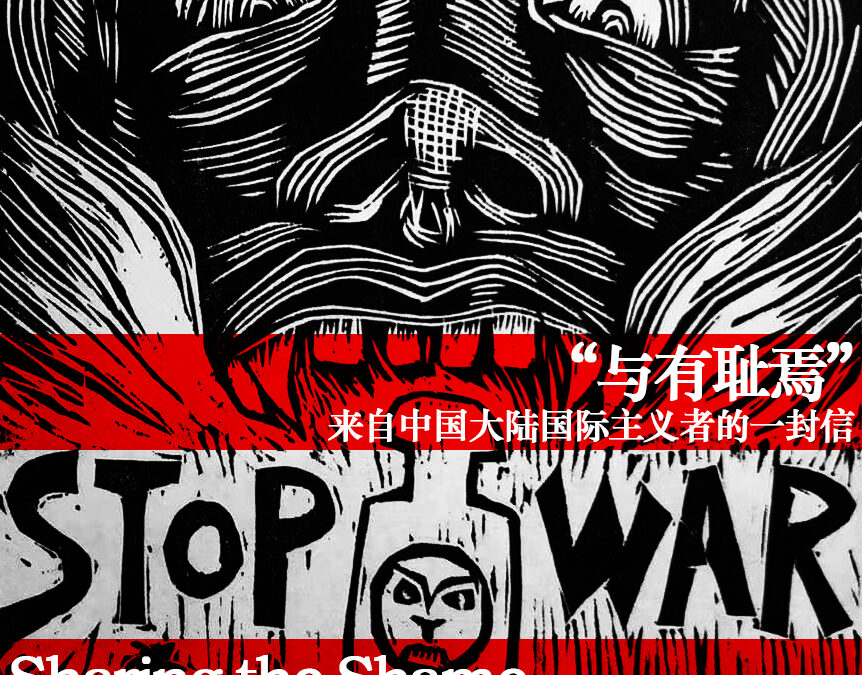 As noted in our previous post, the Chinese state and social media platforms have been censoring some of the content critical of the Russian invasion of Ukraine (although this has been inconsistent, as the state itself has yet to take a clear stance on the matter). Meanwhile we received the following letter from an anonymous group that identifies as mainland Chinese internationalists. It provides a good window into how the recent conflict has been perceived within the Chinese left. As with other reports and translations that we’ve published, the position laid out here belongs to the authors. Though we are sympathetic to the sentiment, it should be clear from the language and framing used in the piece that this is not a statement from Chuang and should not be portrayed as such. One of our goals has been to help increase the visibility of other groups and individuals in China that have been grappling with similar concerns, so we are glad to be able to host the following letter. (Scroll down for the original Chinese.)1

As internationalists, we are firmly against the invasion by Russia, to the same degree that we are against NATO’s reckless expansion. What we’re in support of is not the Ukrainian government, but the right of the Ukrainian people to be free from any imperialist interference.

Putin has backed the indepence of the two republics in Donbas, claiming to protect the people there from the Ukrainian government. Undeniably, over the past eight years, the residents of Donbas have been living in endless wars. What the people there are yearning for is peace, rather than what Putin has been doing, i.e., infinitely expanding the war. We will not deny the persecution of the local people by the Ukrainian government, nor will we deny the presence of neo-Nazis in Ukraine (just like in Russia), nor will we deny the existence of progressive, anti-fascist efforts in the armed struggle of the people of the Donbas region. But if Putin’s regime really means to protect the people of Donbas, as he has been claiming, we will have to make it clear: how many of those who are representative of the people of Donbas have died at the hands of the Great Russia chauvinists and Putin’s back-stabbing army?

The “de-Nazification” of Ukraine sounds more like a joke, considering that Putin and his followers have been the strongest supporters of the European far-right for the past decade. Russia’s invasion of Ukraine will only boost and reinforce radical nationalism within the country. Putin wants to popularize the idea that Ukraine is a country constructed by Lenin and the Soviet Union. However, as other progressive groups have pointed out, which existing nation-state is not the product of construction? In the name of “decommunization”, what Putin really desires is to erase Ukraine’s sovereignty and even its national identity while concealing his ambition to rebuild a monoethnic Russian empire. It is true that Ukraine would not have formed its current borders without the Leninist principle of national self-determination – including the equality of nationalities and the freedom to political secession. But what Putin does not dare to admit is that without such a principle, the Soviet Union would not have gained the trust of its constituent republics from the beginning, and the 70-year union of Socialist republics could not have existed at all.

Rhetoric is hypocritical and fragile in the face of real geopolitical forces. For the past decades, concerns for “human rights” and “genocide” are frequently used to justify wars started by the West. Didn’t Russia, seemingly on the opposite side, use precisely the same rhetoric in the case of Donbas? Likewise, for the United States, which was quick to impose sanctions based on human rights considerations, where are the sanctions against Israel, at a time when it is occupying Palestine and imposing apartheid? Where are the sanctions against Saudi Arabia, which is still invading Yemen and causing a huge humanitarian disaster? Not to mention that many analyses have long pointed out that economic sanctions, while they may indeed weaken the Russian regime’s ability to fund its war machine, will impose a greater impact on ordinary people than on Russia’s powerful elite. What is clear is that the dictator never cares whether his people suffer.

It is a war between the people with simple justice and a state that worships power. In Russia, we see countless anti-war voices from common people. They are not fearless. Everyone is deeply aware that they are risking arrest for holding “No War” banners high, that any expression of dissenting opinions might land them in prison, that the regime is taking advantage of the emergency to further its suppression of dissidents, and that more than 1,700 people were taken away by police for protesting the first day when Putin launched the invasion. That said, shame and fury has driven countless Russian people out onto the streets again and again. The protest against Putin’s regime is not limited to this specific war, if we realize that Russian people had already been engaged in an invisible war against their government for many years concerning Moscow’s widespread corruption, the collusion with energy oligarchs, the manipulation of democracy, and the use of gangsters to attack the opposition. How absurd is it for a regime to claim that it can rescue another nation while at the same time repressing its own people?

This is not just a war on the ground, but also an information war online. People end up being represented by their states, and the same information or concept might have completely opposite meanings for different camps, or be held hostage by different preconceptions. Then, in frenzy and anxiety, these warped ideas float out across borders on the winds of war. Living in China, we have found ourselves in an absurd situation of what the state media ironically call “cognitive warfare”. The Chinese government has been condemned by the international community for its ambiguous attitude: advocating for peace on the one hand, while strengthening its ties with Russia on the other. Meanwhile, under the propaganda of the mainstream media and increasingly stronger censorship over many years, Chinese netizens are unfortunately seen at this time by the world as the biggest and loudest supporters of war and of Putin. Progressive anti-war voices are muted, and protesters are punished. Ashamed as we are, we strongly condemn the propaganda machine that, once again, “points to a deer and calls it a horse.” At the time when the Russian invasion had just begun, our government was busy persecuting its own population in one of the biggest public opinion crises China has seen in recent years. The entire nation was shocked by revelations of countless cases of trafficked women, who had been tortured and treated as sex slaves for decades. These crimes had evolved into a social norm with the collusion of local governments.

We will be living in the post-truth era for a long time to come, in which emotional divisions will take the role of “common sense” in public life. Therefore, we defend the right of the Ukrainian people to determine their own destiny, and the right of the Russian people and others living under authoritarian regimes to express disagreements with their governments, as well as to demonstrate solidarity with those who have been invaded. “Shame” has been a common sentiment expressed from Russia in the recent anti-war rallies on the streets and on the Internet. And we, the Chinese internationalists, share the shame.

The Ukrainian people have their own wills, and they have the right to decide their own destiny without interference from Western or Eastern imperialism. They should be freed from any harm done in the name of “protection” or “rescue”. But at the same time, we must understand the complexity and cruelty of international politics, especially when the Ukrainian people are caught between two empires, facing the war against humanity, invasion, and even the threat of nuclear weapons.

Neutrality is hypocritical under the pressing conditions of the day. Russia’s war of aggression has become unstoppable, so opposing Ukraine’s war of self-defense would contradict the anti-war activists’ claim to stand with the victims. We must stand with the Ukrainian people who are defending their country, with the Russian and Belarusian people who are risking their lives to protest against their respective states, and with people around the world who are thirsting for peace and condemning war. The international community must respect and respond to the demands of the Ukrainian people and offer practical help, and that should include us. We believe that NATO troops will not change the situation, and will only increase the chance of a world war – which is the last thing we want to see. We share the view with our predecessors, responsible anti-imperialists, who, in the anti-war movements during the Vietnam War, did not call for the Soviet Union’s interference to counter the U.S. force, but supported its assistance of arms delivery to the Vietnamese resistance. Today, there are also cyber weapons. Hacker groups disrupting Russian government websites and mainstream media, online mapping sites interfering with the march of Russian ground troops, and public opinion arenas of solidarity with the invaded. These efforts are together shaping the cyber terrain of progressivism in this war. Internationalists have a basic duty to support those who are swept up into just wars of resistance to fight against the invaders.

You cannot destroy magic with magic. What we are calling for is not fleeting anti-war passion or a kind of cease-fire that conceals more profound and invisible conflicts, but the abandonment of cold war logics and rhetorical performances. Practical efforts should be made to rebuild peace in Ukraine and beyond, to reject all strongman politics and state hegemony, and to uproot any illusions about war.

A group of internationalists from mainland China, March 1st, 2022