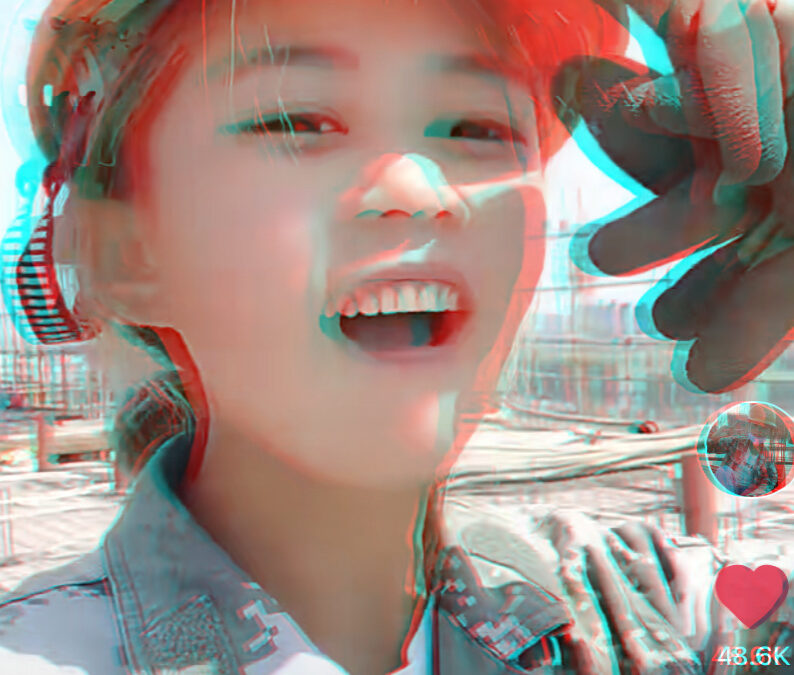 First intake in a series from our friend G.

The following is the first of a new series of investigations into Chinese social media, compiling information on trends in social phenomena that I believe can provide additional context for readers outside the country. While Chuang has already translated numerous social media posts that have a more explicitly “political” bent (blogs and articles from activist circles, for example), this series will instead attempt to aggregate public posts from all walks of life to create a clearer picture of what discussions are like on the other side of the Great Firewall. This includes memes, art and videos, along with analysis of how they fit into China’s ever-growing internet technology sector.

The benefits of this kind of analysis are clear: the fact that the Chinese internet is de facto walled off from the rest of the world has had profound effects on how people outside of China conceive of and discuss the country. On the one hand, most of us are familiar with the shrill, never-ending feedback loop of social media and how this has created a series of visual languages through which people understand and articulate politics across the world. This can have positive effects, such as the creation and memetic transmission of icons, terminology and tactics that occurred across the world beginning with the movement of the Yellow Vests in France, continuing through 2019, and now multiplied by the ongoing George Floyd uprising. It can also work the other way—a similar meme language has emerged between supporters of US president Donald Trump and those of Jair Bolsonaro, the current far-right president of Brazil, and this is despite their language differences.

China, however, remains outside of this loop, its homegrown apps and social networks content to feed off their massive domestic user base. Even TikTok, the first Chinese social network to gain any significant market share in the West, was severed at birth from Douyin, its identical twin for the Chinese market. The two apps thus cycle in their own separate loops, divided by the firewall. Now it appears that even this division will not be enough to save TikTok from scrutiny,  as the app has been threatened with a ban in the US, and has already been banned completely in India. From outside, the firewall is often imagined purely in terms of the ways in which it limits the Chinese population’s access to the global internet. But, in fact, what we are looking at is less and less one global internet barred to people in China, and more two separate intranets that have grown up alongside one another. The Chinese internet is not a garden walled off from the lush forest of the “real” internet. We are, after all, talking about a full fifth of the world’s population, not counting foreign users of Chinese infotech infrastructure. Instead, we might imagine two walled gardens next to each other: the roots may be interconnected beneath the ground, but this is easy to forget when you can’t scale the fence.

In this series, my mission is to try and chip away at the wall and see the actual people on the other side. In reality, the firewall prevents those outside from seeing in just as much as it does the opposite. And this prevents outsiders from getting an earnest view of people’s own articulation of their everyday lives and struggles. Through examining the constant deluge of self-publishing on Chinese social media, then, we can begin to understand how issues are actually discussed, articulated and joked about by proletarians who are often seen as mere statistics. Dry debates about the nature of Chinese capitalism become much more concrete when we can see workers complain about how much they hate their jobs, just like us. Within these posts we can find a critique of everyday life trimmed down to a few seconds, a critique that is shocking if only for its similarities to our own.1

This initial compilation focuses on the self-expression of migrant workers on the Douyin app, primarily in the Pearl River Delta region of Guangdong province. Later investigations will look at other groups, some of which are not mutually exclusive with the category of migrant worker: young and old Maoist dissidents, far-right nationalists, millennial slackers, and Mongolian protestors incensed over the state’s recent efforts to eradicate their language. The Chinese internet can be a remarkably dynamic place despite the multitude of censorship regimes,2 but for now I will keep the investigation limited to specific platforms and topics. The posts below were collected from March to August of 2020, and all showcase the tribulations of migrant workers in the recovering industrial sectors after the lifting of the pandemic lockdown. While the recovery period has not yet seen much in terms of collective action, what I found instead was an airing of collective grievances.

Migrant workers have long been a sort of political enigma for activists, both in China and the West. Their sheer numbers and relative importance in the global supply chain have led many around the world to anticipate their eventual cohesion as a political body, in the fashion of images inherited from 20th century workers’ movements, with the presumption that unionization and the re-establishment of organized labor as a force to be reckoned with in the world’s factory would be a necessary first step in the realization of revolutionary subjectivity within the class more broadly — despite the proliferation of other forms of proletarian rebellion in China and around the world since the late 2000s. To help encourage this process, a number of interventions have been attempted by activists in China since the 1990s, especially since the strike wave of 2010.

The results have been mixed. While migrant workers have shown themselves to be militant when pushed into a corner (e.g. when faced with the ever-present problem of wage arrears), there was no sign of the kind of revolutionary subjectivity that was assumed to be a natural byproduct of workers in collective struggle. No new union bodies were ever really formed, whether underground or formally recognized, and there was little to no attempt to create any kind of long-term mediation between capital and labor. This strategy would culminate in the Jasic Affair of 2018, which has already been discussed at length.

Yet a lack of revolutionary subjectivity should not be conflated with a complete lack of subjectivity. Class consciousness is not just about workers mobilizing symbols drawn from revolutionary history, but about how the class comes to recognize itself, its activity, and the potential for its overcoming in everyday life. This may not appear in explicitly “political” ways, such as those expected by activists or even other workers. Instead, this subjectivity often manifests in moments of hope, humor and irony trafficked between proletarians on censored platforms in the inherently symbolic language of the meme, which is always initially immune to such censorship because of its opacity outside the groups within which it circulates.

The sudden adoption of short-form video apps has dramatically reduced the barriers to entry for self-publishing for everyone in China, and shared meme languages have been with these platforms since the beginning. Migrant workers have been no exception. Armed with nothing but a cellphone (often forbidden within factories themselves, hence the frequency of videos outside the gates), they document the world around them and forge their subjective identity as migrant workers. Using hashtags such as #FactoryLife (#工厂生活) and #LiftTheBucket (#提桶), migrants have been using the Douyin format to create short microblogs documenting their lives post-lockdown, which are then viewed and shared by other migrants on the app, often thousands of times.

These posts, while short and succinct, cover a wide range of topics. They may simply be migrants venting about the indignities of industrial work, such as a vindictive boss…

…or sexual harassment on the factory floor…

Some workers might try to lighten the mood by simply killing time on the shop floor, cracking jokes and making skits…

…and some rely on dark humor. As the country exited its lockdown, multiple users silently filmed their grim working and living conditions with the old Chinese rock band Tang Dynasty’s rendition of “The Internationale” blaring in the background.

But the most popular posts either document or satirize one of the most important parts of the migrant experience: packing up one’s belongings in a bucket (also used for washing clothes, etc.), leaving the factory dormitory, and looking for another job.

These posts often make light their struggle to maintain employment by parodying another ubiquitous internet format: the social media challenge. This seemed to begin in November 2019, when a migrant worker jokingly posted a video about someone showing up at a Shenzhen electronics factory to see how long he could enjoy the company-provided food and shelter before getting caught. In this video, he packs up his belongings after being told he “failed the challenge.”

The video quickly went viral across Douyin, with workers “challenging” each other to see how long they could last at their jobs before grabbing their buckets and looking for better work. This meme caught on especially after March, when people began returning to work after the country began easing its COVID19 lockdown, and it has continued throughout the summer’s sluggish economic recovery. Here are a few from the last few months:

This woman, after posting videos of her lugging her bucket to multiple factories, posts the following:

In all these posts we can observe some similarities. While technically recovering, industry is still sluggish and unable to fully reincorporate those shaved off of the labor force during the lockdown. Those lucky enough to have jobs loathe going in, and they stay sane by cracking jokes at the absurdity of their situation together with others stuck in the same boat.

But we also see a clear self-identification with their position as industrial workers. When given the chance to present themselves to the internet, to publish their thoughts and feelings, they explicitly do so from this perspective. And while they do not engage in the collective actions typical of classical labor movements, they do partake in a much older proletarian tradition: sabotage via low morale. They identify their enemies (their shitty bosses) and share tips and tricks to get one over on them, even if it is ultimately just a tongue-in-cheek meme. Workers revel in the camaraderie of sharing mind-numbing work, and in cheering each other on when someone gets caught slacking. Watching these posts, it becomes clearer why activists’ focus on workplace-based mobilization may have appeared alien. After all, why try to agitate when you can just pick up your bucket and leave?

Of course, you can only take the bucket so far. These workers are clearly cognizant of the fact that the economic situation is stacked against them and that their options are increasingly limited. While the revival of the imagined workers’ movement ideology that some activists have anticipated may never truly take shape, we are seeing a consciousness of a different sort. What direction this consciousness will take, if any, is yet to be seen. The proliferation of worker memes has also led to their inevitable monetization, with some migrants attempting to become full-time video producers, creating content for their friends still working industrial jobs, or for middle-class professionals looking to see authentic proletarian characters dish out folksy wisdom. Future installments will look at this in more detail, along with other posts beyond industrial worker media, such as political subcultures and the recent protests in Inner Mongolia.