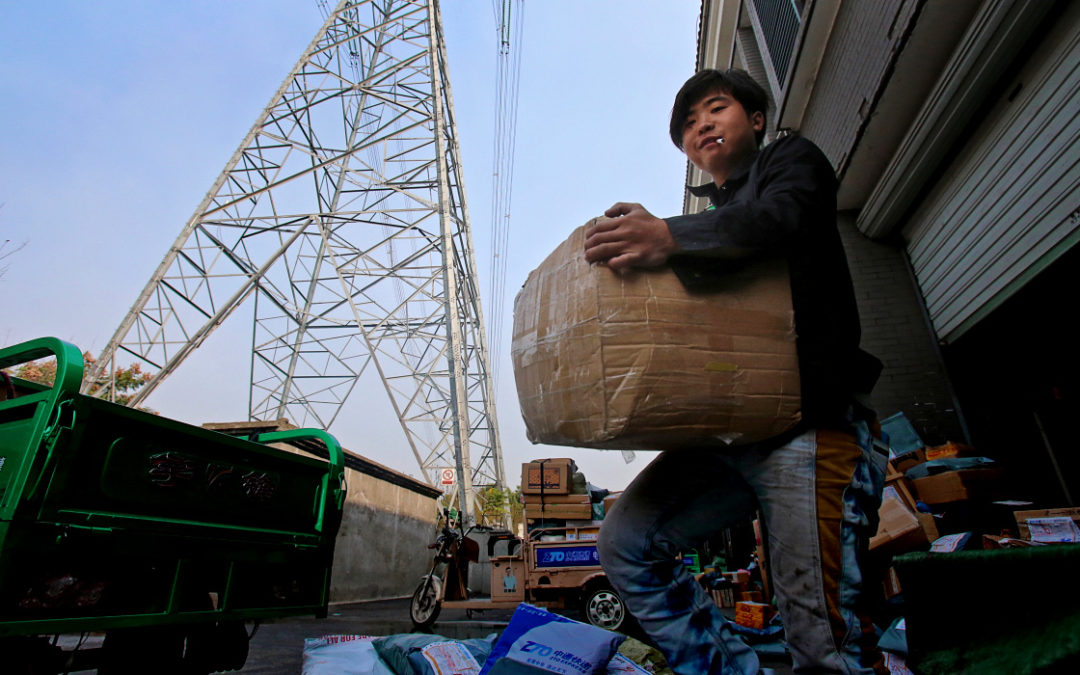 Translation by Chuang of《快递员可以有多惨？》(How bad can it get for couriers?) by 林海, from the 工业区观察 (Industrial Zone Observer) WeChat feed, April 6, 2016. (Original Chinese reposted below.)

With the decline of exports and manufacturing over the past few years, Premier Li Keqiang has been touting e-commerce as crucial for China’s transition to a service-based and consumer-driven economy. E-commerce cannot function without express delivery—in China characterized by the growing army of bicycle couriers visible on almost every street corner. “China’s express delivery market has been growing at more than 30 per cent for the past few years, replacing the US as the world’s biggest by volume, thanks to the e-commerce boom.”1

For ten days starting on March 21st, Shenzhen traffic police began a massive crackdown on unlicensed motorized vehicles (mainly electric bicycles and tricycles) commonly used as taxis and to transport goods over short distances. 17,975 vehicles were impounded and 874 drivers were detained, leading to clashes with the police. This brought the plight of express couriers into mainstream news media.2 The brief article translated below is the first we have seen that attempts to go beyond the inconvenience caused by such crackdowns to investigate the changing work conditions of this increasingly important sector of China’s post-2008 economy.

After the crackdown on unlicensed vehicles in Shenzhen, several thousand couriers quit their jobs, causing widespread concern about Shenzhen’s sudden enforcement of policies. Since then, Shenzhen traffic police have clarified that this crackdown was not intended to affect the express delivery industry, but the damage has been done: drivers were arrested, their vehicles impounded. The incident has already affected those involved, leading inevitably to discussion. As for those who are dissatisfied with law enforcement authorities, we have already seen many articles sympathizing with the couriers. Beyond this, however, the incident has also called our attention to the labor conditions of express delivery work as an industry.

First of all, express delivery is a part of the contemporary transport industry. Its conditions of work are special: besides the warehouse where goods are picked up, it has no fixed point of production or operations. Express delivery workers and their goods are always on the road. From one transport point to the next, when they pick up or drop off their goods, the task of their labor has either just started or is nearing its completion. As for an express delivery person’s place of work and labor conditions, most of the time it is a lonely and individual struggle, through wind and rain, always answering phones and passing along messages, climbing stairs and hiking up hills, passing through streets and alleyways, ceaselessly trekking across the city to its every corner.

As the express delivery industry has risen with the increasing popularity of e-commerce in China, it has been painted by some as a sought-after job where one can make a good living. Perhaps in its first years express delivery was actually quite well paid, but after many years of competition, few have noticed that the actual conditions of express delivery workers have changed:

12 hour days, delivering over 300 items a day, sorting several tons of cargo, carrying at least 7 or 8 kilograms per load, walking over 40 kilometers per day, climbing over 46 flights of stairs, required to keep their phones on 24 hours a days, with phone bills over a hundred yuan paid by the workers themselves on a monthly income of only 3,400 yuan ($523 US)…. All these figures describe the daily work life of every express delivery courier.

This industry, first of all, has no fixed workplace and the conditions are unpredictable (depending on constantly changing weather and road conditions). In addition, the industry has an extremely social aspect to it, as the task of picking up and dropping off items requires making social contact and expending emotional labor. Delivery workers are not merely like vehicles that transport goods, nor are they like workers doing repetitive tasks along a production line.

In reality, not only do couriers need to be familiar with the layout, traffic and appearance of a city, their work involves people every step of the way. Those who give them their packages to deliver are customers; those to whom they deliver packages are also customers. Although they are alone while on the road, the beginning and end of each trip requires interaction with people and the expenditure of emotion.

When their daily deliveries exceed a hundred trips, that implies they need to make contact with hundreds of people, waiting for them to hand off or pick up the goods. Couriers aren’t receptionists–their situation is actually much more difficult. As they make contact with others along the way, they cannot be upset when a customer is late, nor can they vent their anger on customers because of the heavy workload. Each day, they are like transport machines moving to and fro, but at the same time they are obliged to politely greet hundreds of customers with a smile.

In addition to these particularly difficult working conditions, the most distinctive feature of couriers’ work is that the employment situation differs completely from traditional models. According to reports, there is an open secret about the express delivery industry: nearly one million couriers have not signed contracts and do not have social insurance.

“(We) want only young men, as long as they’re willing to endure hardship.” “The base wage is 2,000 yuan ($307 US) per month for at least 100 deliveries per day, with a commission of 0.5 yuan per delivery. After three months you can get a raise.” “Do you get social insurance?” “No. We buy insurance for the vehicles only.” The journalist asked what happens if a courier is injured on the job, and they responded, “That’s why they need to be careful when making deliveries.”

Most express delivery couriers don’t sign contracts or get social insurance; companies give them only accident insurance. Their style of work requires them to be constantly on the road, and their lack of contracts, work accident insurance and other social insurances gives them cause to doubt the protection of their occupational health. As couriers race around the city streets, few people realize that they have basically no safety net; they can only try to watch out for themselves, and trade their sweat and toil in for a bit of income.

On top of this, express delivery companies’ management methods can often be boiled down to one word: penalties. Today, as countless factory workers fight for pensions, medical insurance, etc., most couriers lack even a contract, not to mention basic social insurance, company benefits, subsidies, or humane management practices.

With their ever-changing work environment, highly individualized work, lack of contracts and social insurance, not to mention the necessity to constantly expend emotional energy when interacting with customers, it is difficult for couriers to organize themselves and bargain with their companies. Looking back on Shenzhen’s crackdown on unlicensed vehicles, we can see that thousands of couriers quickly left their jobs. In this instance of “sudden enforcement of the law,” what they lost was just one of their tools, but perhaps what they had been missing all along was really something more.

“The Tianjin Explosion: A Tragedy of Profit, Corruption, and China’s Complicated Transition” (2015)