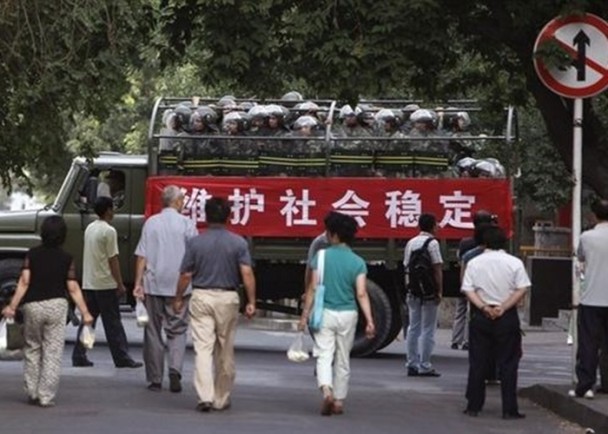 Translation by “Solidarity with Chinese Workers” from《出门见人，回家扫地，扫掉一地劳工NGO》by Zhao Sile (赵思乐), published on 東網 (December 5, 2015). The original is reposted in simplified characters below.

Totalitarianism knows no end. It simply disposes of those who threaten its stability and security.

On December 3rd, at least 16 labor activists in Guangdong were apprehended, questioned and raided by the Chinese authorities.1 At the time of this article’s publication, eight people continue to be detained by the police.2 Among them are four directors of labor organizations, including Zeng Feiyang (曾飞洋) of the Guangzhou Panyu Dagongzu Service Center (番禺打工族服务部); He Xiaobo (何晓波) of the Foshan Nanfeiyan Social Work Service Centre (南飞雁社会工作服务中心); Chen Huihai (陈辉海), from Guangzhou’s Haige Labour Service Center (海哥劳工服务部) (previously Guangdong Laowei Law Firm Workers Training Unit, 广东劳维律师事务所工人培训部); and Peng Jiayong(彭家勇) of the Panyu Laborer Mutual Aid Group (劳动者互助小组). Four of the detained also work with the above organizations——Zhu Xiaomei (朱小梅), He Minghui (何明辉), Sanmu (pseudonym), Deng Xiaoming(邓小明), and Meng Han(孟晗). Among them, Chen Huihai is under house arrest at an unknown location but can be contacted. None of the others can be reached.

In a raid of Zeng Feiyang’s former colleague’s home, police presented a document stating that “this bureau is investigating Zeng and co. for ‘gathering crowds to disrupt public order.'”  When the police raided He Xiaobo’s home, they told his wife that He was “under suspicion of embezzlement.” Labor rights activists in Guangdong believe this wave of repression is ultimately targeted at Zeng and He. At 4pm, He’s wife officially received his arrest warrant.

Ye (pseudonym), a seasoned Guangdong labor rights advocate, pointed out that the people affected by this wave of repression have all once worked at Guangzhou Panyu Migrant Workers Service Center. According to him, the investigation of Zeng had been going for quite some time. About one week ago, Guangzhou’s Liwan District Fengyuan Street sanitation workers organized a strike. Wang Fuju (王福菊), editor of independent news platform for workers, “The Sound of the Hammer” (锤子之声), was arrested by the police while observing the strike. Zeng was also there when the strike happened. After her release, Wang revealed that her interrogation was centered around Zeng. Zeng had also once told Ye that he expected to be arrested in the near future.

“It is apparent that these actions are carefully planned from above. The interrogations of our friends show that the authorities are trying to ‘prove’ that these independent labor rights organizations are all part of a group leaded by Zeng, and use that as an excuse to increase the intensity of surveillance and control.” says Ye. Ye believes that this round of repression of labor rights organizations in Guangzhou and Foshan had long been under works. The Sunflower Women Workers Center (向阳花女工中心) and Nanfeiyan, two labor organizations, had their registration revoked mid-year this year. “This is a reflection of the authorities attempting to increase societal control during this economic downturn. On the surface, it looks like an attack on individual labor organizations. In reality, it is an attack on the workers’ movement. Zeng, Luo, Chen and Peng’s organizations are all actively pushing for collective bargaining. When the authorities attacks these organizations, they are in fact saying ‘no’ to the workers’ legal right to collective bargaining.”

Ye added, “China’s economic downturn has taken the form of decreasing exports, and troubles in the steel and coal industries. This is a product of China’s export-oriented economic policy and excessive productive capacity. Many predict that the real economic downturn will take place next year. The authorities will increase the intensity of social control even further then, and enhance their attacks on social and on workers organizations.”

It is not new for labor NGOs in Guangdong (there appears to be few, if any similarly active labor organizations outside of here) to encounter close scrutiny and police repression. The continuing downtown of the economy suggests the likelihood of increase in worker struggles. However, there have not been any recent large-scale strikes, and labor organizations have not been especially active. Labor organizations also lack the capacity and ability to organize cross-regional strikes. Therefore the [state’s] current large-scale offensive at this moment appears to be out of the blue.

On the other hand, Guangdong has been quite “exciting” of late. Several legal cases with national implications have been taking place. On Nov 19th, the trial of Xie Wenfei (谢文飞) and Wang Mo (王默), supporters of the Hong Kong “Umbrella Movement” who were arrested on charges of “inciting subversion of state power”, took place in the Guangzhou Intermediate Court, more than one year after their arrests. On Nov 27th, the decision on the case of Guo Feixiong (郭飞雄) and Sun Desheng (孙德胜) was finally announced. The two were arrested in August 2013 on charges of “gathering crowds to disturb public order” for vocally supporting the Southern Weekly (a.k.a Southern Weekend),3 and were kept locked up by the authorities for more than two years while they awaited results that still had not come long after their trial. The judge unexpectedly added “disorderly behavior” to the list of crimes Guo was being charged with, sentencing him to six years in prison, while Sun was sentenced to two and a half years.  On that same day, Liu Yuandong (刘远东), an activist arrested even earlier in 2013 for participating in the Southern Street Movement,4 was sentenced to three years in prison.

Why, then, have the authorities chosen this moment to deal with the thorny labor organizations and pro-democracy advocates they had long put aside? Why did it decide to deal with these two forces at the same time at this particular moment, after such a long delay?

Since the cases related to Hong Kong’s “Umbrella Movement” last year, the authorities have changed their modus operandi from a “stabilization” (维稳模式) strategy, to one of “national security” (国安模式). Under the “stabilization” strategy, local authorities decided their course of action. After the events in Hong Kong, however, the central government began to centralize coordination of the whole country’s security measures. The repression of civil society this year was kicked off by the March 7th arrests of the “Feminist Five.” In April 2015, shortly after the Feminist Five were released, the anti-discrimination organization that a few of them had been involved in, Yirenping (益仁平), was declared illegal by the Ministry of Foreign Affairs. During May and June, a number of anti-discrimination organizations related to Yirenping were also investigated.  Some leaders were detained, and many NGOs were harassed and asked to cancel their registrations. Jia Lingmin’s (贾灵敏) trial started in May, and Tang Jingling’s (唐荆陵), in June. At the same time, Wu Gan, also known as “Super Vulgar Butcher” on the Internet, and petitioners from Shandong were also detained. From these incidents, we catch a glimpse of the big cases under the “national security” strategy. Then the infamous “July 9th Crackdown” on lawyers erupted, which lasted until August.

From the mid-August to November, the situation appeared calmer for civil society. Yet, it was also clear that the authorities were preoccupied. The government had been busy preparing for the military parade in August.  Beijing and the whole country virtually came under martial law. Following the parade in September, the authorities visited USA and participated in the United Nations Assembly. A few days after returning from the USA, the government also visited the UK and five other European countries. With the end of the October 23 visit to the UK, November could best be described as “the calm before the storm.” (Actually it was not all calm. On November 14th, the Ministry of Public Security announced that the the Xinjiang Special Police Unit had started an all-out assault on terrorists, and killing many after a 56 day long pursuit.) Shortly thereafter, the authorities re-ignited the crackdown on civil society, starting from the South.

It is as if someone is cleaning out their house and takes a momentary break to visit some friends. He puts down whatever he is doing and closes the door (human rights lawyers were not allowed to leave the country during this time), and leaves the house. After fulfilling his social obligations, he returns home and with one hand, sets his automated machine to the “clean” function, and with the other hand, throws out the pre-packed garbage.

The authorities treat the country simply as their home, diminishing any distinction between governance of a country, and ownership of a home. An authoritarian regime has its own agenda (议程). (Actually, it is more akin to a “plan” [安排] than an “agenda,” since nothing is actually up for discussion [议].) Such a regime disposes of anything or anybody that displeases or contradicts it. The terrifying reality is that such a regime appears limitless, given that it gets rid of anything that threatens its stability and security.

Civil rights organizations, independent research institutes, anti-discrimination organizations, human rights lawyers and grassroots activists have been swept away. Now, it is time for the labor organizations to be attacked. Soon enough, the government will have its clean slate.