“Workers’ democracy” and its discontents 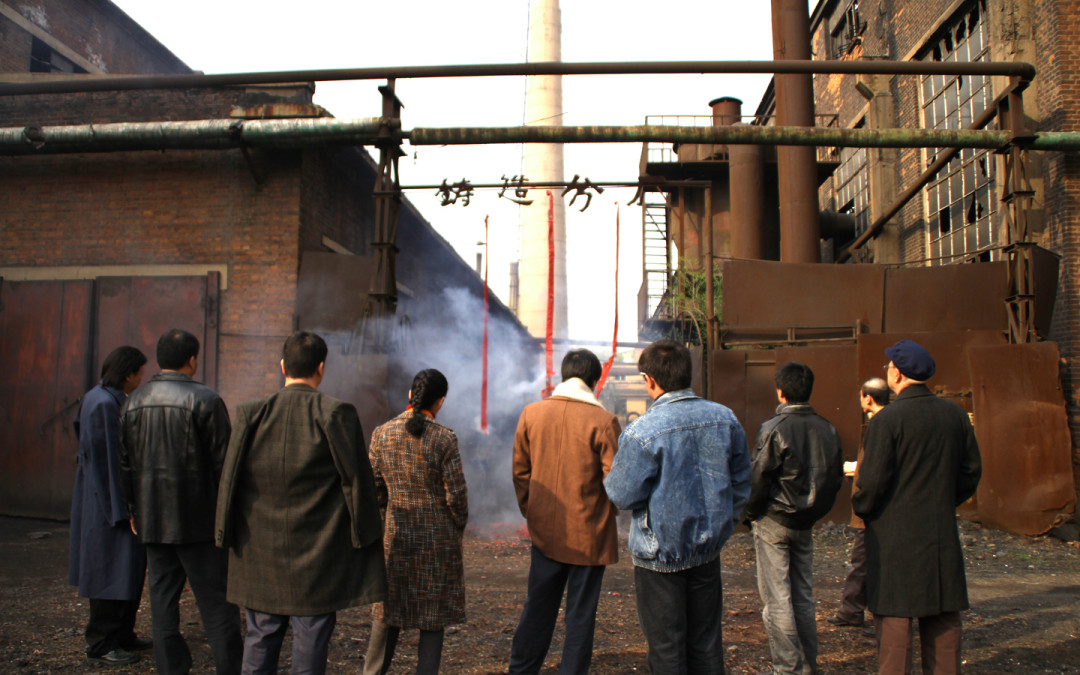 Review by Wen for the Chuang blog

This blog has focused on contemporary struggles, especially those of migrant workers in the private and foreign-invested export sector. But while China’s state sector has been radically restructured and reduced in size and influence, it remains the “commanding heights” of the Chinese economy, dominating industrially and financially strategic sectors. In fact, state ownership of commanding industry and land form the basis of the regime’s claim to be “socialist.”

China’s state socialism might have hailed the working class as “master of the nation,” but it never allowed more than a token of workers’ democracy. Institutions such as enterprise branches of the All-China Federation of Trade Unions (ACFTU), and the Staff and Workers’ Representative Congress (SWRC) in the work-units, served primarily as ideological instruments of industrial management more concerned with manufacturing consent than producing political space for the exercise of workplace democracy.

But this did not prevent workers from taking socialist discourse and institutions seriously and fighting for their realisation from time to time. This is the subject of Philion’s research on the practice and discourse of “workers’ democracy” from the Mao to Post-Mao reform eras, with a focus on the social and economic transition away from state socialism in the 1980s and 1990s. While several book-length studies have analysed state workers’ resistance in this tumultuous period, this book stands out as the only study foregrounding workers’ democracy.

Using newspapers and field interviews with state workers, the book attempts to recast the history of China’s state sector restructuring as a collective and discursive struggle against the coming of authoritarian neoliberalism. The book starts with an examination of the history of working-class politics in the Mao era. Often excluded from historical memory, the Mao era witnessed three outbursts of working-class militancy: 1949-1952, 1957-1961 and during the Cultural Revolution. In each moment, state workers appropriated the idea of democratic management to express their discontent with the hierarchal and dictatorial managerial structure. But these were repressive years, and workers’ democracy could not have been accepted.

In the late 1970s and early 1980s, the discourse of workers’ democracy re-emerged. It was exploited by the Party-management to produce legitimacy for dismantling state socialist labour relations. Both the SWRC and ACFTU, disbanded in the Cultural Revolution, were revived as ideological cover. But workers skilfully took advantage of this, subjecting management to election.

Recognising the risk, the Party-management soon replaced the election of management with the election of SWRC representatives. These representatives were made responsible for monitoring managerial performance. While much less useful, this nevertheless provided workers with an institutional platform to engage in the protection of their welfare entitlements. But the discourse of workers’ democracy was not restricted to the workplace. State workers also participated broader movements, such as the Democracy Wall movement of 1978-1981. It was only later that liberalism became hegemonic, replacing these socialist critiques of Maoism.

The 1990s was a period of market deepening. Failing to adjust to the market economy and starved of capital investment, state enterprises encountered serious obstacles and lost out to the emerging private and foreign-invested sector. Aiming to overhaul the structure of state economy, China embarked on massive labour redundancy and privatisation. Ironically, it is also at this time that the Party management introduced democratic-sounding concepts such as “enterprise affairs transparency” and “Employees Director and Supervisor System”.

Philion compares the discourse of workers’ democracy in official sources, such as the Workers’ Daily and ACFTU bulletins, with that in field interviews with state workers in Henan Province, where the movement for workers’ democracy flourished in the 1990s. The result is hardly surprising. The state media used this language to rationalise and legitimise enterprise restructuring and privatisation. Developing their own discourse, workers demonstrated scepticism and cynicism toward the official interpretations, referring to the failure of the SWRC in living up to its democratic goals. According to one movement leader,

“You can say you’re supporting ‘democratic management’ until you’re blue in the face, but when it comes down to it this kind of democratic management isn’t any more real than what is done in privately owned companies…we can and must organise workers and let them decide how the factory should be run and keep outside interests from speculating on the assets we’ve built these many years. That’s real democracy for workers.” (p. 124)

Based on these interviews, Philion presents a fascinating account of workers’ protest strategy, who were caught between sticking to legal channels, petitioning the central government, and uniting workers from different factories. But workers were in a position of weakness against the state-engineered assault on their livelihood. Despite numerous individual cases of labour protest, coordinated actions remained few.

Structural weakness was not the only obstacle. Operating in a capitalist economy generates contradictions for the exercise of workers’ democracy. At one state enterprise where the SWRC successfully took over management, the accumulated debt and lack of capital investment ultimately drove the SWRC leaders to search for private investors to form joint-ventures. In this context, the success of workers democracy thus signified merely a different path to integration into capitalist relations.

The book ends with the defeat of state working class as an organised force in the early 2000s. A number of sustained protests were suppressed until the restructuring was completed. Today the institutional memory of Mao-era labour relations and discourses have left little visible trace. With better wages but much more intensified labour, state workers seem content in a world of industrial misery.

Philion’s book helps to rescue this episode of working-class history at a time when much of that history is being erased, demonstrating how Chinese workers have at times taken matters into their hands and collectively put pressure on capital and the state. A more sobering lesson is that such struggles may have been doomed from the start without constituting an organised movement challenging not only the procedural legitimacy of privatisation, but also their capitalist context.

In the years since this book’s publication, we have seen an upsurge of migrant working-class militancy, and the idea of democratic process in workers’ mobilisation is demonstrated in case after case. In this respect, Philion is perhaps too pessimistic in assessing the political potential of migrant workers from the countryside. He believes that while migrants fight for better wages and conditions, and occasionally union elections, they may not “challenge the right of capital to monopolise ownership and control of enterprises” (p. 133) as state workers did in the 1990s. While migrant workers should not be expected to develop a discourse of “workers’ democracy” like that of these earlier state workers, they may articulate a more radical movement that avoids the pitfalls of the latter. As for the younger generation of state workers, they arguably face more ideological and political obstacles.

The value of this study lies not in a revival of this particular discourse of workers’ democracy specific to China’s state socialism, but in keeping alive the memory and radical possibilities of working-class self-organization in an era when administrative fixes are often seen as the only solution.