Lide shoe workers beaten and arrested during assembly in Guangzhou 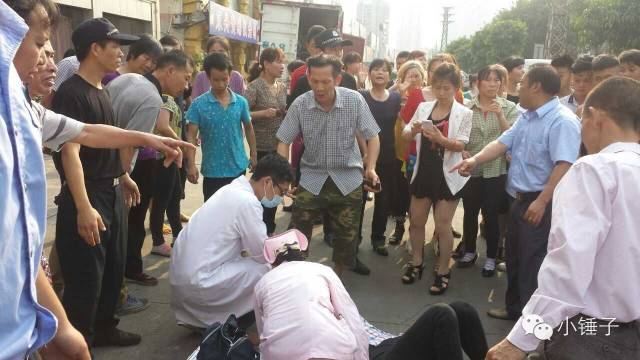 Last December we translated a report about  the strike of 2,500 workers at a Lide shoe factory in Guangzhou – one in a series of struggles at footwear factories in Guangdong that began with the historic strike of 50,000 workers at six Yue Yuen shoe factories in Dongguan last April and continued through several incidents last month, including the strike of nearly 10,000 workers in Zhongshan that was brutally repressed. Last December at the Guangzhou Lide factory, CLB reports:

After two strikes and three rounds of bargaining, Taiwanese-owned Lide agreed on 17 December to pay social insurance contributions dating back to 1995 and to a one-off compensation package of between 2,000 yuan and 12,000 yuan, depending on employees’ years of service. The company was also forced to disclose any future relocation plans and continue the dialogue with the workers’ representatives. Management further agreed in writing that it would not retaliate against those representatives.The industrial action has now ended and the employees have returned to work.

Now, however, we see that even this apparently successful battle is far from over, and the trend we observed last month of increasingly violent repression has continued. Next week we will post an analysis of class struggle in the Pearl River Delta so far this year. 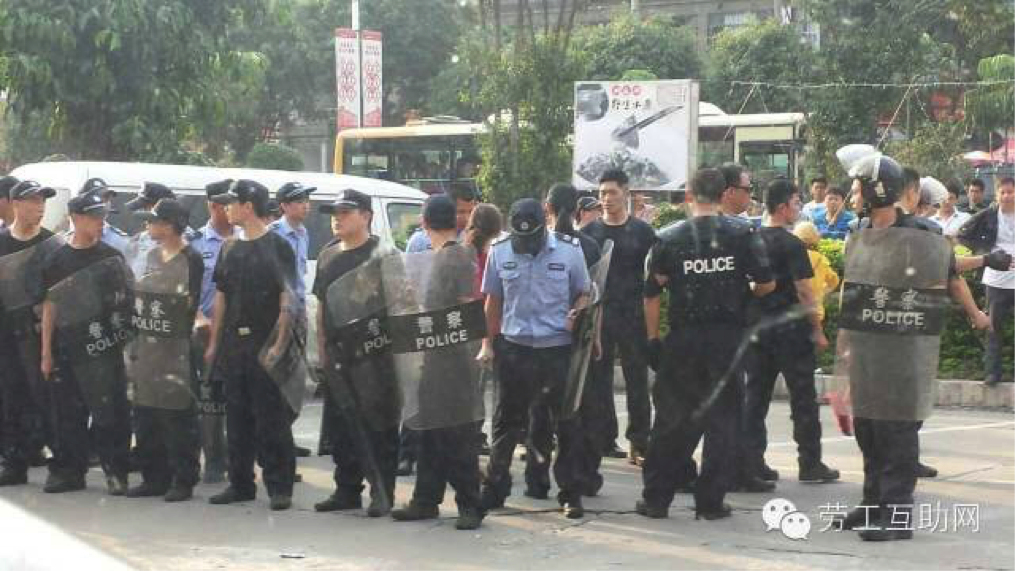 Repression of Lide workers’ assembly. Photo from a report on 劳工互助网 that has been taken down.

In the afternoon of April 19, 2015, 106 Lide shoes workers and 20 Lide workers’ representatives held an assembly meeting at Fuli Hotel in Luozhuang, discussing the demands that require the employer to complete the payment for the social security and pension fund and the compensation for the factory’s closing. Around 4:00pm, hundreds of Panyu police and auxiliary police, coming together with 10 special force vehicles, suddenly broke through the meeting, beat and arrested Lide workers and Panyu [NGO] Dagongzu’s staff member Menghan. The latter was arrested and removed from the scene, while the workers were crying in pain.

In the middle of the assembly meeting, when the new representatives were being elected from a pool of workers, who sat and spread out in 8 tables and every table elected 2 representatives, and when the election was about to be completed, the Panyu police surrounded the hotel and broke into the building to arrest the workers. When the police threatened and singled out a women worker, the women worker fainted. The police did not allow the Lide workers to call the ambulance initially, but after negotiation, the ambulance finally came to the scene and the woman worker were sent to emergency care. Meanwhile, a male Lide worker who was taking pictures and protesting the police was surrounded and beaten by 6 police officers. This worker was later removed to the lower level of the hotel and was detained in a police vehicle. After half an hour of protest, the detained male worker was released from the vehicle, but his cellphone was damaged and his hands and legs were injured. Meanwhile, Panyu Dagongzu’s staff member Meng Han was captured and was quickly removed from the scene in a black police vehicle that had a civilian licenses plate on. A dozen of workers ran to the Nan village police precinct, demanding the police to release Meng Han.

Guangzhou Panyu Lide Shoes Co., Ltd is an exclusive foreign capital ran shoes enterprise. It mainly focuses on producing leather shows. It has around 2500 workers. Beginning in the January of 2014, information was spread saying that Lide shoes factory was going to be relocated outside of Panyu, moving away to Nansha. Thereafter, the production lines and workers were relocated to the Nansha factory. However, the factory management did not tell the relocation to the workers and did not negotiate with workers whose benefits were affected by the relocation. Some of the Lide workers informally received the relocation information and noticed that the management was intending to reduce the number of the orders and to reduce the incomes of the workers who were doing piece-work. Doing so to force the workers to leave by themselves, without paying the destined compensations demanded in the labor contract.

In the middle of August in 2014, a dozen of more outspoken Lide workers were seeking external supports. From the beginning in September to the end of October, Lide workers representative met 5 times and all of the Lide workers met once in a larger assembly. On November 25, the factory threatened and forced the workers to sign an unfair contract that changed the conditions of labor. The workers refused the new contract and the forced signing triggered the anger in the workers.

On April 13, 2015, Panyu Dagongzu staff members, Zeng Fei Yang and Meng Han, were both wanted by the Panyu Nan village police precinct for disturbing public order and illegal gathering. The Panyu police said, the police precinct was called and informed by the factory management, saying that Dagongzu provoked the workers to disturb order.