Yet another shoe factory revolt: strike of 10,000 suppressed in Zhongshan 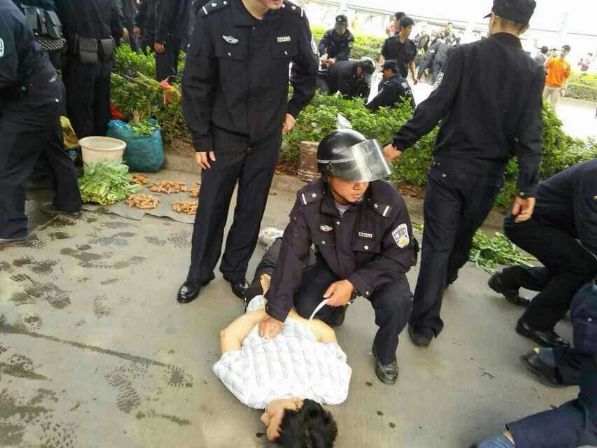 Translation by Pancho Sanchez of 《广东中山近万工人罢工游行遭镇压》(“Strike + march of nearly 10,000 workers suppressed in Zhongshan, Guangdong”) from Boxun.com, March 23. (If you know any more information, please share in the comments section below. This is the only report we’ve found on this strike, other than one on WeChat that was taken down before we had a chance to read it.) The next day in the same city, a smaller strike at a bag factory (制包厂) was similarly suppressed (Chinese report here).

This follows a strike of 50,000 workers at six Yue Yuen shoe factories in Dongguan last April (probably the largest strike at a single company in recent Chinese history), a strike at another Yue Yuen factory in Zhuhai last July, a strike of 2,500 workers at a Lide shoe factory in Guangzhou last December, and a strike of 5,000 workers at Stella shoe factory in Dongguan earlier this month, to name only those we know have made it into the media. (All these strikes have been in Guangdong province, although there are also many shoe factories in other parts of China, especially Wenzhou.) We wonder why it is shoe factories in particular that have seen so many large and sometimes partially successful strikes in the past year? Did last April’s enormous strike at Yue Yuen set an example that others emulated? And does the fear of another Yue Yuen explain the apparently more brutal suppression of the two strikes this month? In this case, however, the main demands of both this and the other shoe strike this month were related to housing. Have housing issues become a central concern of workers in general throughout the Pearl River Delta this spring? 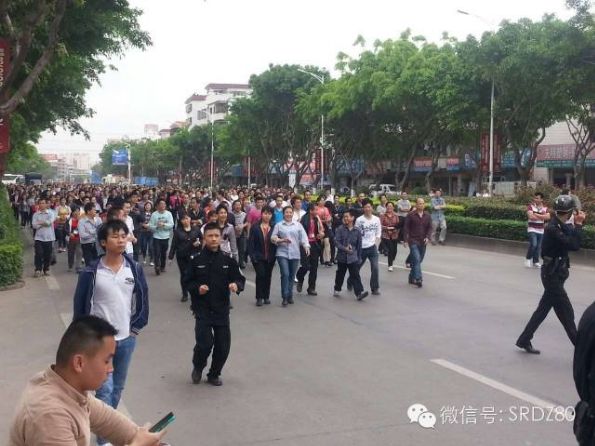 All photos are from the Boxun report translated here

In Zhongshan City, Guangdong Province, nearly ten thousand workers went on strike and marched on streets. A number of protesters were arrested and beaten by the police. Since 2000, Xin Chang Shoes Co., Ltd., located in Zhongshan City, Guangdong Province, refused to buy housing fund for its workers. On Monday, March 23, Xin Chang launched the strike and marched outside of the factory areas, nearby traffics. Several workers and witnesses uploaded pictures to social networking sites.

A worker on the internet, with a title “You Jump, I Go Home,” said: Zhongshan Xin Chang Shoes Co. violated the housing fund rules, thousands of workers went on strike. Ever since Xin Chang Shoes Co., Ltd. moved to Tanzhou Zhongshan in March 2015, it has not contributed to the housing fund for the employees. The company’s violations undermined the legitimate rights of the workers who then went on strike.

Demonstrators faced a numbers of police and were subsequently suppressed, dispersed, and several workers were beaten. More than ten workers were arrested and the plant has been locked down.

Another netizen witness, titled “Xiang Xiang,” said: thousands of Tanzhou Chang Xin shoes factory workers went on strike and marched. Many traffic junctions were temporarily paralyzed. The government was afraid that the intensity of the strike would get out of hand and ordered the police to suppress the strike. The working life is very difficult. They arrested ten people, grabbing them and beating them at the same time. Now, the militarized police locked down the factory and the workers were not allowed to go out. 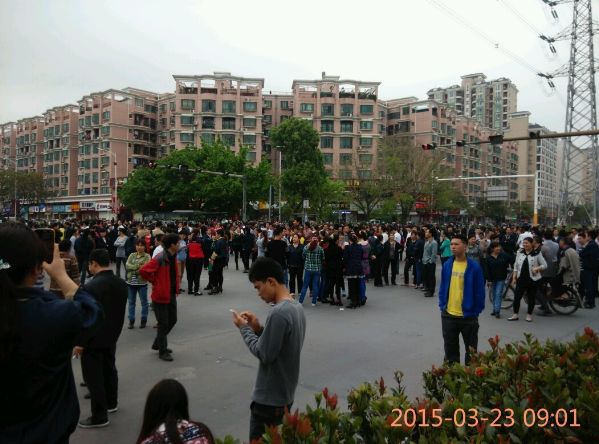 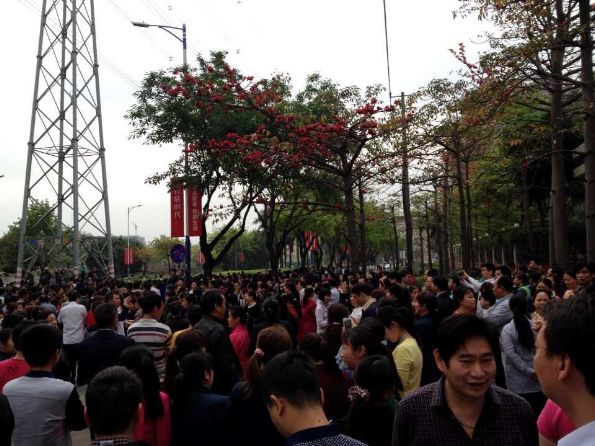 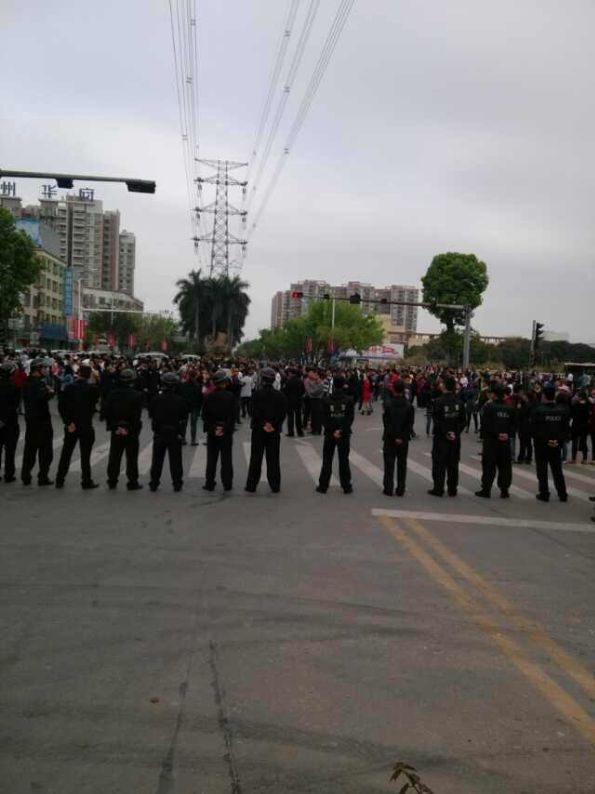 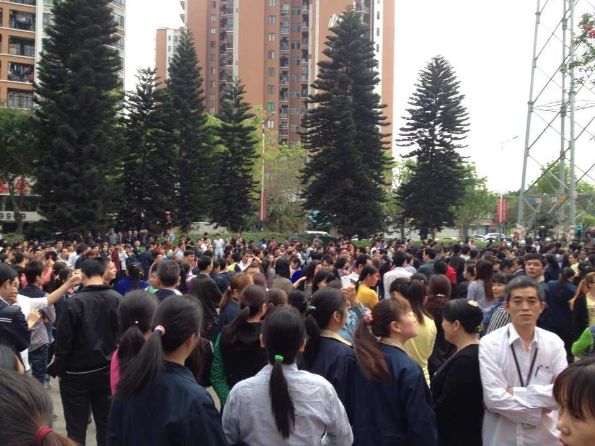 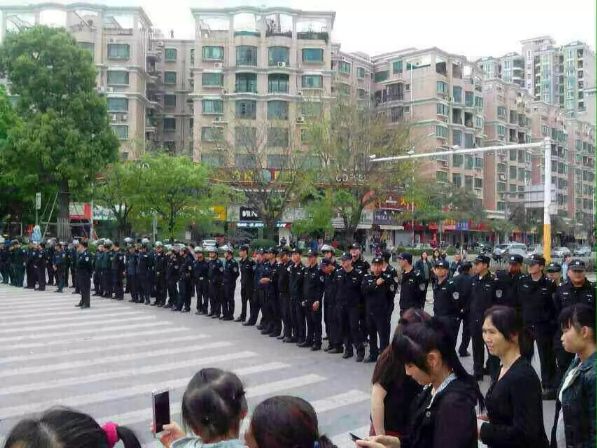 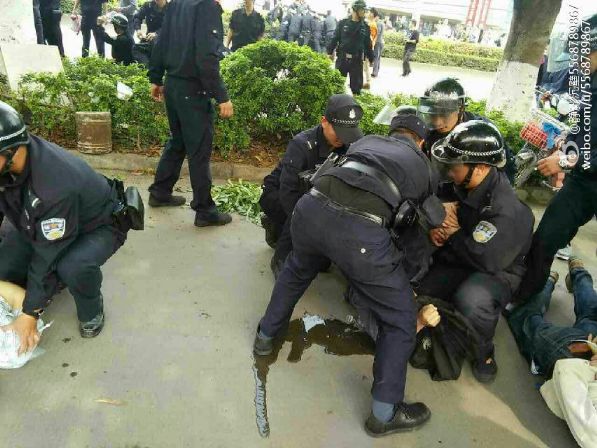