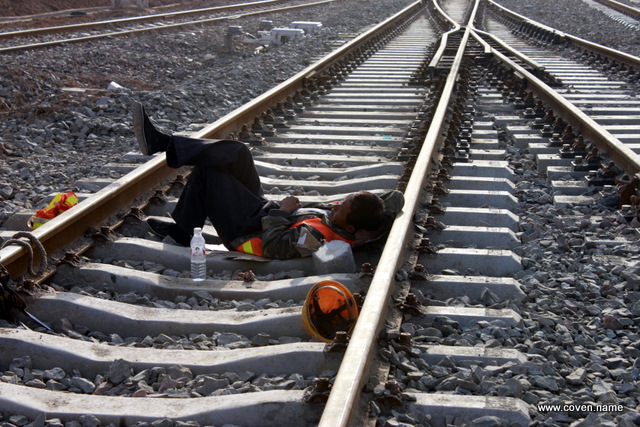 Part Two in a series of translations from the independent workers’ newsletter Railroad Workers Bulletin (铁路工人通讯). For background see the “Prologue” to issue #1. Below is a translation of “A Few Tales of Rights Defense” (几个维权故事) by “One Hundred Years of Solitude” (百年孤寂) from issue #1 (June 2015). The original is available here.

In order to fight for our rights, we have to unite. The Southern Railway’s (XX) Line has done well in this regard. They got organized because three people took the initiative. After studying relevant laws and regulations, train operators started developing their own tactics for collective action:

The (XX) Line wanted to separate the three leaders of the action and have them relocated. Upon hearing this, a dozen or so train operators went to find the director of the Line to protest. Every day the director was under intense pressure, and his appearance grew more and more haggard as the days went on.

One day, the director invited them to dinner. The operators went, but before starting to eat, they flipped over the table and yelled, “We won’t eat your food!” In other words, they resisted the director’s attempt to buy them out. No matter how the managers tried to punish these workers, other train operators unconditionally supported them and all chipped in to cover their wages. With so many people helping out, how much money does it cost an individual to support punished workers? If the collective action succeeds, how much money does an individual stand to gain? Even a child can figure this out.

In the end, they achieved a  small victory, but they didn’t stop there. To this day, they’re still struggling for more gains. This happened in 2008. After the success of the action, train operators won a large increase in their wages. At that time, all the drivers were trying to get driving assignments (跑车), which paid 12,000 yuan at that time! [….]

So in order to fight for our rights, we need people who are articulate and understanding to lead the way. Others should support actions in a practical way. We cannot afford to be selfish. But we should also be reasonable and restrained and not rely on empty words. Before actions we need to thoroughly prepare and devise specific plans.

If we support those who take the lead, and if the latter resist the managers’ attempts to buy them out,  we can achieve great things. The managers panic when they see so many people united. If one person tries to perform an action by him or herself, the manager will fire that person immediately without hesitation. What about ten people? A hundred people? A thousand people? If we don’t unite, they won’t think we amount to shit. If we unite, they won’t amount to shit. Even if we sue them, if only four or five people sue them, they can handle it, but if hundreds of people sue them and go to court together, and if we don’t go to work, they’ll be forced to sit down and talk.

For this kinds of thing, we can’t expect immediate results. But we can organize and try: let the strong contribute labor and the ones with money contribute funds. When the manager comes out to negotiate, everyone should stand outside and join in courageously. I know this isn’t easy, but there doesn’t seem to be any other way.[…]

I heard an amazing example of rights defense from one of my good friends in Fujian. He went to Beijing by himself and registered at a hotel at 10 PM. Before 6 AM he was gone, no one knew where. Turns out he had gone to Tian’anmen Square with a placard and was immediately taken away by plainclothes police, and then he handed in the documents (把材料递交上去). Later every worker contributed 2,000 yuan.

Have you heard of “The Seven Sisters of the Nanchang Passenger Line”? They were seven workers on collective contracts (集体工). Nowadays whenever a new car begin operation, it hires new workers who do the same work as regular workers, but with much lower pay. These seven female workers went to the head of the company to demand equal pay, and knelt outside of the main gate with placards. But then they discovered something horrible. An insider told us that the company would give regular positions to only 10% of contract workers per year. But no one ever told us! For this reason many workers on the Nanchang Line have gone to the company seeking arbitration.

All of this I’ve heard from other workers, and dammit, it really makes my blood boil. I wanted to go back and organize with other people, but no one was willing to stand up!

But the administration heads are so ridiculous now that we can’t discuss things rationally with them. Because of transportation problems last year, a dozen or so of us workers said, “We’re not running these routes. Whoever wants these routes run can do it themselves. If you make us run these routes we’ll leave en masse. We’ll go home and won’t come back.”

Man, we really have to struggle, even just to afford to eat and keep living each day. Our goal is to increase our income, to get the pay we deserve for all the sweat and tears of our youth. I come from a family of railroaders. Our parents and grandparents gave their whole lives to the railroad. Our generation, too, must eat from the same bowl. We just hope to live with a little dignity.