The December 3 crackdown is class struggle 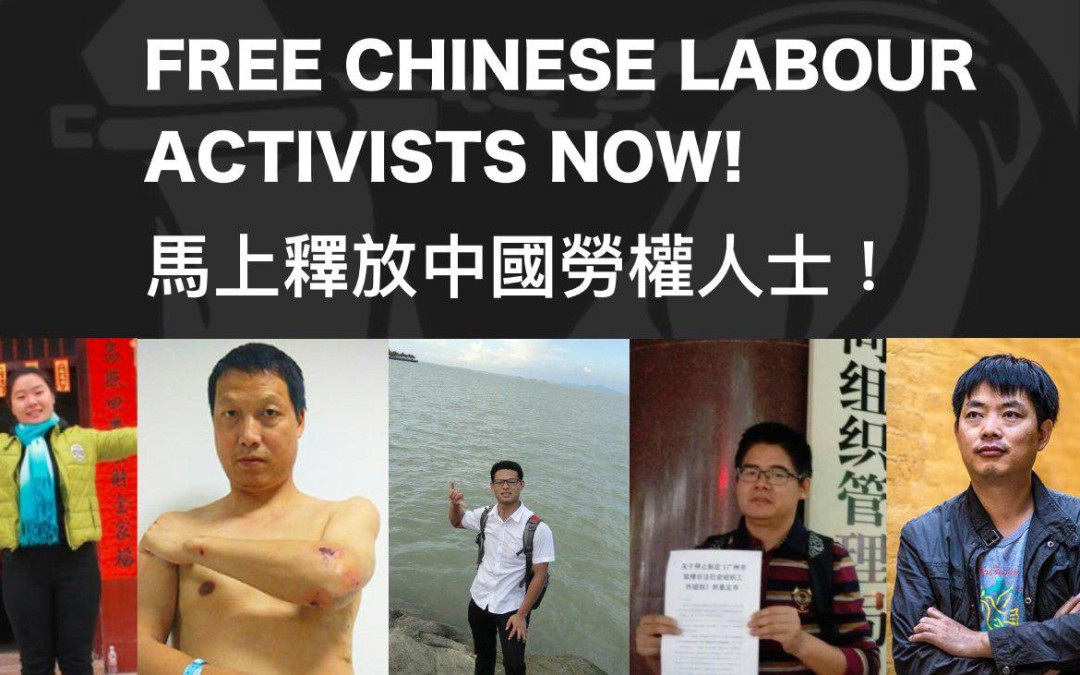 Translated by “Solidarity with Chinese Workers” from 《打击劳工机构，是一场阶级斗争》(The attack on labor organizations is a class struggle) by anonymous from iLabour (新生代), December 15, 2015. (Scroll down for original Chinese.) Although we at Chuang disagree with some of the ideas in this article, we’re posting it here because it’s the first Chinese writing we know of to analyze this latest wave of repression in terms of “class struggle.” This article also provides background missing from the existing English writings we’ve seen.

For updates and solidarity actions, follow the Facebook page “Free Chinese labour activists now 馬上釋放中國勞權人士”, and sign the petition here (now in multiple languages). For more information in English, see other translations and writings being compiled on Libcom under the tag “Solidarity with Chinese Workers.”

What is class struggle? Is it something from the last century? The recent and ongoing repression against labor organizations in Guangdong is a living example of class struggle.

In The Communist Manifesto, Marx wrote, “The history of all hitherto existing society is the history of class struggles.”

When “class struggle” is mentioned, people tend to think this is something that only happened in the 20th century—as if it were a Chinese political campaign from 1949 to 1979.

But the state’s abandonment of the discourse of “class struggle” doesn’t mean that the thing it originally referred to has disappeared. Nowadays, the proletariat is mainly the target of struggles. It has gone from being the vanguard of revolution to a synonym for “indolence” and “poverty.” The value of workers’ labor is ignored, and the fruits of their labor are expropriated by capital.

In this historical context, Chinese workers, especially in the PRD (Pearl River Delta), have been exploited by foreign and domestic capital for 30 years. While young, their wages are low and they lack labor protections. When they reach retirement age, the suddenly discover that they cannot enjoy urban retirement benefits, and many first-generation nongmingong (migrant workers from the countryside) cannot even get their retirement pensions.

Capital and the city, having squeezed all they can out of workers from the countryside, can then simply throw them away without qualms. This is because capital is highly organized, whereas the combined efforts of capital and the state have reduced workers to a sheet of loose sand, maintaining their atomized condition.

The abandonment of the discourse of “class struggle” has greatly benefitted capitalists of all origins, since workers lack the theoretical weapons and organizational basis to resist their exploitation.

Over the past two decades, workers in the PRD have experienced multiple tragedies, the most well-known being the Zhili Fire of 1993 [at a toy factory] in Shenzhen, which took the lives of 84 women workers. But these tragedies have not caused capital show any restraint. Although the Labor Law came out in 1995, it’s so commonplace for factories to disregard the law that you can hardly find one that doesn’t break the law. Other policy initiatives, such as the Provisions on Democratic Management of Enterprises and the Provisions on Collective Bargaining, have been aborted in the face of strong opposition by capitalists of all origins.

Law is a manifestation of class power. When proletarian power is weak, the law cannot provide sufficient protection for workers. Workers in the PRD thus began to use all kinds of strike actions to fight for their rights. These actions are often unorganized, and in work conditions with a high rate of turnover, they often “disperse as soon as the first shot is fired.” These are called “wildcat strikes.”

Although wildcat strikes give capital a certain degree of pressure, they can win only a small amount of economic concessions, and workers lives are not significantly improved. Although these actions have also pushed through state policy changes such as the Labor Contract Law and the Social Insurance Law, as long as workers’ actions lack organization, factory bosses can continue to operate outside the law.

Back when the Internet was not yet widely accessible, it was hard for many workers to even learn about relevant laws and policies, so how could they “walk the path of the law” as state authorities called on them to do? Early labor organization thus focused on teaching workers about the law.

At that time, industrial districts teemed with all kinds of scams, advertisements for private hospitals, and romance magazines with deceptive ads (知音小说), and state propaganda just focused on combatting scams and policing the registration of migrants as temporary residents. Its legal propaganda just told people to obey the law, saying nothing about labor law. (Actually, this is still true today.)

At first, labor organizations just provided places for worker to interact and learn from each other. Later, some organizations started to provide legal education, enabling workers to use the law to fight for their rights.

During that period of history [the 2000s], the ACFTU (All-China Federation of Trade Unions) was still debating whether to accept nongmingong as formal members. Even after they decided to accept them, the ACFTU never found a way to develop its membership while simultaneously maintaining friendly relations with capitalists of all origins.

In 2010, the big Honda strike began a turn toward organization (组织化) among workers fighting for their rights in the Peal River Delta, including the demand for democratic election of union leaders. The historical background for this demand was the inability of individual legal rights-defense (维权) to satisfy workers’ collective needs. The Honda workers demanded wages higher than the legal minimum wage, so it seemed to “have no legal basis” (无法可依). But the minimum wage is set each year through negotiation between capital and the state, in which workers have no way to participate. The 2010 Honda strike was thus an opposition to the status quo of “capital determining the laws” (资本立法).

After that, workers’ struggles in the PRD became more organized and their demands more assertive (进取). In other words, they forced capital and the state to sacrifice some of their interests in order to satisfy the workers’ demands.

Since 2011, Panyu Dagongzu Service Center, and later Haige Labor Service Center and Laborers’ Mutual Aid Group (all in Guangzhou), have promoted collective bargaining as a means toward the resolution of industrial problems, and in Foshan, Nanfeiyan Social Work Service Centre has focused on rights-defense for workers injured on the job.

It can be said that these organizations were born from workers’ struggles. It’s a ridiculous joke to say that the advice these organizations have given to workers about collective bargaining amounts to [the criminal charge of] “assembling crowds to disrupt social order” (聚众扰乱社会秩序). Collective bargaining is simply asking a company’s boss or management to sit down with the workers and talk. Often when workers request this, the boss arrogantly refuses, even deliberately trying to enrage the workers so they resort to militant actions, which the police can then use as a justification for cracking down and arresting the workers.

Moreover, many of the cases in which these organizations have participated concern the companies’ failure to pay their share of the workers’ social insurance. Is the “order” our society needs one where workers cannot enjoy the social insurance they have worked to obtain for decades? Factory owners openly “assemble crowds” to break all kinds of laws for production, whereas workers are prohibited from assembling to defend their rights, and organizations helping the workers are harassed and suppressed—this is class struggle: the bourgeoisie’s legal and political struggle against the proletariat.1

On the surface, the objects of repression are a few labor organizations in Guangdong, but the real objects are workers fighting for their rights. Even before [December 3], many workers had already been criminally detained for participating in collective actions.2 As workers’ actions become more powerful, and workers achieve more gains (albeit meager gains), capital and the state in turn make use of the power they wield to suppress the workers.

This repression shows that the state does not permit worker-led collective bargaining, thus smashing the beautiful myth of a “triple-win situation between labor, capital, and the state” (劳资政三赢) proposed by certain labor scholars.

From this crackdown, workers should learn that every victorious battle may be followed by a fierce counter-attack by capital and the state. In the face of such counter-attacks, all we can do is to continue building solidarity among workers. In this round of the class struggle, workers must first become a class—a class fighting to seize the means of production. Only then will it be possible to achieve real power.