The East is not red 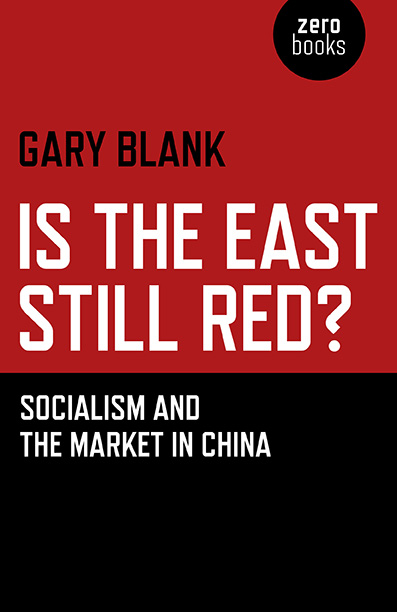 A review of Gary Blank, Is the East Still Red? Socialism and the Market Economy (Winchester: Zero Books, 2015).

Gary Blank’s Is the East Still Red? Socialism and the Market Economy makes the intriguing argument that reform-period China (1978 to the present) is not capitalist. But it does so largely by way of a theoretical argument with Martin Hart-Landsberg and Paul Burkett, Giovanni Arrighi, and Robert Brenner. In short, Blank uses the latter to argue that economic actors in contemporary China are not dependent on the market, so China cannot be a capitalist society. Yet as the book spends so much time arguing with Hart-Landsberg and Burkett as well as Arrighi, it ends up thin on details concerning China’s development and contemporary society. Why this focus on theoretical argument with these authors? Blank seems more interested in engaging with debates within the left than analyzing the concrete dynamics of Chinese society.

The Mao period, Blank argues, was not socialist but a form of “bureaucratic collectivism.” We are almost halfway through the book, however, before we get any detail about China’s development, a brief six page discussion of the Mao period that quickly transitions into a more abstract discussion of bureaucratic collectivism, for which the Soviet Union provides the main example. Here Blank claims that we can understand the Mao period as a form of the Soviet model, and he gives little specificity to the Chinese social system. For example, he calls collectivization from the mid-1950s “Sovietization” (47), although this is the precise moment that China began to shift away from the Soviet model. In the end, Blank spends more time explicating the rather familiar arguments of Robert Brenner than of investigating the actual operation and dynamics of Mao-period Chinese society.

Oddly, though Blank claims that “China was never a socialist society” (59), once he turns to discuss reform-period China (in the last third of the book), he calls the system “market socialism.” So what is “market socialism” if not socialist? It is unclear what Blank means by this, and this is a major weakness of the book. He does refer to it as a “transitional” form (4), and focuses attention on the struggle between workers and the bureaucratic class. He also says that “well into the 1990s… China maintained a bureaucratic-collectivist system” (5). And even after the 1990s, and assumedly the end of bureaucratic collectivism, China was not capitalist. This confusion of categories seems to come from the way Blank has developed his argument: he continually begins with theoretical arguments about the Soviet Union and sometimes Chinese socialism and then turns to the actual concrete historical development of the Chinese social system as a way to verify his theory. Blank would do well to reverse his method, and develop his abstract categories out of the concrete dynamics of Mao- and reform-period Chinese social and political development.

When he does get into concrete details about the reform period (and he is much better on this than the Mao period), Blank argues that capitalist restructuring has been “frustrated” in China, mainly because “non-capitalist ways of reproduction” remain (6). Further, he argues that “the Chinese leadership’s aspiration for achieving a form of East Asian developmental state has been decisively blocked” (6). Even more, he states that “strategies of ‘rightful resistance’ have been effective in upsetting the process of primitive accumulation” (6). These arguments are not convincing. First, and more basically, if decades of around 10% growth doesn’t indicate the success of a developmental state, then Blank has set the bar very high, indeed. But more importantly, Blank vastly overestimates the success of class struggle in resisting capitalist restructuring. Dealing with urban-sector industrial workers, Blank relies on information on worker struggles of the late 1990s when the CCP pushed many state-owned enterprises (SOEs) to go bankrupt or be privatized (88-9). This was a time that older industrial workers made use of socialist rhetoric to criticize restructuring. But it was the state and not the workers that were successful, which would be clear if Blank made more use of more recent sources. Blank does then jump to a later discussion of New Left opposition to continued privatization, but to attribute the continuance of SOEs to the opposition of critical intellectuals is misplaced to say the least. The state-led reforms have been aimed at maintaining and concentrating large, strategic enterprises under their control, and this process has continued in waves since. Notably, most incidents of “class struggle” now take place in private enterprises. Yes, the Chinese state is worried about the social instability caused by this restructuring—what state isn’t?—and it is exactly because of this that restructuring has entailed a slower, more measured process than that in the Soviet Union. But this process is nothing but the increasing domination of labor by capital. The protests of 1989 (not discussed in Blank’s book) are telling on this point. As Wang Hui and others have pointed out (see our short piece on them on this blog), the 1989 massacre marked a defeat of working class resistance to market restructuring, leading to the rapid transformation of the Chinese economy from the early 1990s.

As for the rural sphere, Blank argues that as rural land has not been fully commoditized (although it has been increasingly treated as such), China cannot be capitalist since rural residents still have access to land on which to survive. Here his misplaced use of Brenner is evident. While it makes sense to argue that market dominance plays a crucial role in the emergence of capitalism in rural England, the idea that any access to “non-capitalist ways of reproduction” (6) automatically define a society as non-capitalist defies the real history of capitalism in the West, never mind China. The subsistence one gains from farming in China only provides a meager existence for the majority of rural residents. Not only is the economic difference between the rural and urban spheres great—constituting the main form of inequality in China—but within the rural sphere, remittances from migrant workers provide the main basis of reproduction. At best, land rights operate as a weak form of welfare, and we must assume that Blank would not push his argument so far as to say that the US or European societies (with their welfare—a non-capitalist way of reproduction—and even state subsidies to agriculture) are not capitalist. Rural labor is forced into the market and urban labor is fully commoditized as well. Furthermore, agriculture in China is dependent on the market both because of its high use of industrial inputs and in order to market agricultural products. Chinese farmers are not subsistence farmers by in large. Again, the class struggle so evident among migrant workers should key us into this dynamic.

As we argue in this blog and in our forthcoming journal, reform-period China must be understood as a capitalist society if its social dynamics are to be clear. The first issue of the journal Chuang will include an extended investigation into Mao-period China in order to develop a theoretical understanding of the dynamics of the period, forming the basis for understanding the transition to capitalism in the reform period. A second article on the reform period will come in the following issue.