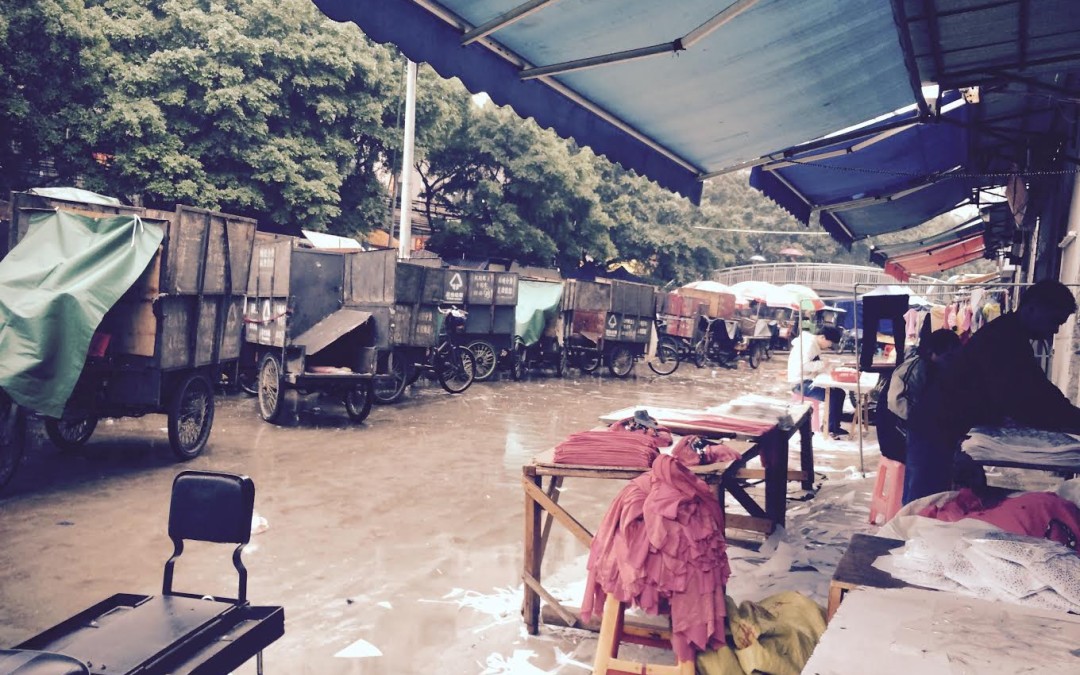 While observers of urban villages in China have documented the uneasy processes of urbanizing former agricultural collectives, few have described the everyday discriminatory policing and extractive practices migrant residents face as they encounter city officials and security officers privately hired by local village leaders. Everyday attempts to extract profits through rents and fees color the migrant residents’ daily encounters as they struggle to find stable and secure livelihoods in the city. The reflections below reveal the broader tensions and discriminatory regulations that differentiate local city people from the so-called floating population.

One afternoon, I encountered hostile treatment by uniformed officers toward undocumented migrants within an “urban village” (城中村) in the Pearl River Delta.1  This time the extractive, regulatory governance was enacted by city officials known as chengguan, a group of men hired by the city-level government to eliminate unlicensed vendors who sold goods to passers-by along city streets. As I descended the bus and approached the pedestrian bridge situated by the front entrance of the village, I casually climbed up the concrete steps towards the bridge and immediately spotted several men careening down the bridge with their arms flinging. The men were young street vendors attempting to escape from the patrolling chengguan who had made a surprise appearance on the bridge that day, aiming to capture these vendors. About five or six vendors had already fled the scene when I arrived, leaving a bundle of plastic iPhone covers and other accessories wrapped in a purple cotton blanket.

A young man crouched on the wet concrete, desperately picking up every piece of plastic that lay scattered there. In front of the crouching man, there were about five or six chengguan dressed in green, heavily-padded jackets with matching pants and black lace-up military boots. They stood around in a semi-circle with feet arms-distance apart, directing another officer who was holding a video-camera to document the scene. With tones of authority, the officers spoke to one another in Cantonese (the local dialect) excluding migrants from understanding their conversations. They debated about the proper position for the cameraman to stand so that he could capture the most accurate shot. I overheard one officer say to another, “Here, here. Take a shot from here.” Meanwhile, a burly, round-headed officer picked up the purple bundle and hugged it like a bear with both hands, slowly sauntering with a group of officers back to their van that was parked in front of the gates by the village entrance. Two officers diverted from the large group that was approaching the parked van, who then turned around, and walked underneath the bridge in search of more street vendors.

As I observed the scene, I noted the surrounding pedestrians pretending to go about their day undeterred from their ordinary activities. In fact, I caught two informal motorbike drivers monkeying around in an innocent bout of mutual teasing. An older Uyghur man with a rounded beard and moustache wrapped a red and white scarf around the neck of his fellow motorcyclist in jest, adding humor to the otherwise serious and rather disturbing scene. The vendors who were able to escape remained on the other side of the bridge, standing by the sidelines with uncomfortable smiles, possibly relieved that they were able to escape the chengguan this time. Later, I followed the two officers who walked underneath the bridge. Momentarily, they turned around to make sure that they had successfully cleared the street of vendors before slowly walking back to the van to rejoin their colleagues.

After the scene of action returned to normal, I remained confused about why the chengguan chose this particular day to crack down on the bridge that day, since it was usually crowded with street vendors selling 3-D posters, headphones, stationery, and puppies on any given day. Although the chengguan might have videotaped the events to prove that their actions were not excessive by legal definitions, it might also be possible that they had to meet a quota or simply took the opportunity to confiscate more goods than usual in light of the approaching Chinese New Year. In any case, I felt quite disturbed by the overt videotaping by the chengguan, particularly the documenting of the faces and material objects that incriminated the vendors. As a heavy-set officer left the scene with a large bundle of loot, it became obvious to everyone there that one vendor had escaped while losing a package of goods equivalent in monetary value to several weeks of personal earnings. What happened to the bundle of goods? Will the tape be reviewed and for what purpose? Will it simply be added to the archive of incriminating faces, places, and things?

In another instance of such confrontation, I weaved through the trail of cars, bikes, and pedestrians that lined the main street leading to the village. A pedi-cab driver carrying mountainous rolls of fabrics upon his wooden cart raced past me, causing me to almost lose my footing. I found my way through the maze of alleyways and quickly found cover under the shadows of apartment buildings that clustered around me. Moments later, I saw a plump middle-aged woman shouting at two men dressed in green uniforms with badges attached on their shoulders. One was a rather large, round man, and the other was smaller, carrying a notepad that seemed to be filled with bills and receipts. As I strolled past them, the woman screamed in Putonghua at the two men in extreme exasperation, “I have to pay for the water whether I use it or not!” From her bold statement, I gathered that the officials had come for the collection of water fees. As the woman continued to scream in anger, the round gentleman casually walked up to the storefront of the Lanzhou noodle restaurant next door. There, a vendor was preparing steamed noodles. He greeted the approaching official with a cheerful, accommodating smile. I continued on my way in order to avoid catching unwanted attention from the officials. Although I never learned about what transpired out of the confrontation, I could only guess that both storeowners had to pay the unwanted fees. At that point, I worried that the officials would make their way up the street and demand money from every store owner in the urban village. Luckily, however, I never saw the two officials again.

Finally, another encounter with private security officers caused a certain degree of discomfort for me when the group of men dressed in dark blue uniforms entered a garment factory in the urban village. At that time, three policemen entered the shop floor and seemed unusually well-mannered, kind, and respectful. The three men appeared to be in their twenties. One of the men passed the gates and entered into the factory interior, visually inspecting the surrounding space, while asking the factory owner, Mrs. Lee for her identification papers. Mrs. Lee politely obliged, directing her husband to bring the paperwork from upstairs. Later, Mr. Lee handed his wife a large brown envelope, from which Mrs. Lee took out her personal ID, as well as what appeared to be their business license. When I glanced over her shoulder to inspect the papers, I wondered whether the paperwork was legitimate or fake. I saw a plastic card with a black and white photo of a woman’s face, which appeared to be Mrs. Lee’s ID card. She also took out several pages of documents printed in black and white, which might have been the business license. After leafing through the documents and ID cards, the young officer asked Mrs. Lee where the couple lived. She replied frankly that she and her husband lived in the second-floor attic and pointed to the makeshift room in the top corner of the factory. The officer pointed to the unstable cardboard walls surrounding the attic, commenting about how unsafe the steel ladder, attic walls, and wiring that hung disorderly around the cement walls all seemed. With a slight tone of sternness he stated, “Well, I’m warning you now. Someone is going to come and point out how unsafe this place is. It normally wouldn’t be a problem, but since more than one person lives here, someone will come by and inspect this place.” His comment seemed to have implied that another officer in the near future would certainly come, expose these unsafe conditions, and present them fines. In response, Mrs. Lee cordially accepted his warnings without any resistance.

The young man then proceeded to ask Mrs. Lee about the workers’ identification papers. Out of concern for the workers, Mrs. Lee assured the officer that they indeed had them, so it would be unnecessary for the workers to pull them out. As I turned my attention from the policemen to the workers on the other side of the factory floor, I noticed that the workers kept in working in silence, without even glancing up at the policemen who were standing at the front entrance of the factory. I interpreted the workers’ silence as an indication of fear or intimidation of authority, perhaps even the desire to avoid unnecessary confrontation. Surprisingly, Mrs. Lee kept her composure, which stood in stark contrast from the fear and nervousness she displayed at other times when other police visited the workshop. Perhaps this was because the young men approached the couple with friendliness and respect, instead of impoliteness and intimidation, highlighting the subtle ways in which power was embodied among face-to-face encounters with local authorities as well as people’s reactions to them. After the police left, Mrs. Lee returned to her station and resumed her work at the sewing machine. I asked whether police officers come by often, and she said no. One employee, Ms. Ma, criticized Mrs. Lee for being too honest and revealing too much information to the authorities. She said, “You should have told them that only you lived there, and left it at that.” Subsequently, Mrs. Lee cast her gaze down at her sewing and smiled in embarrassment. She replied, “Oh, it’s no big deal.” Meanwhile, Mr. Lee had remained silent throughout the entire encounter, leaving Mrs. Lee to manage the situation. Shortly after the authorities left the factory, all of us resumed work as if they had never come to begin with.