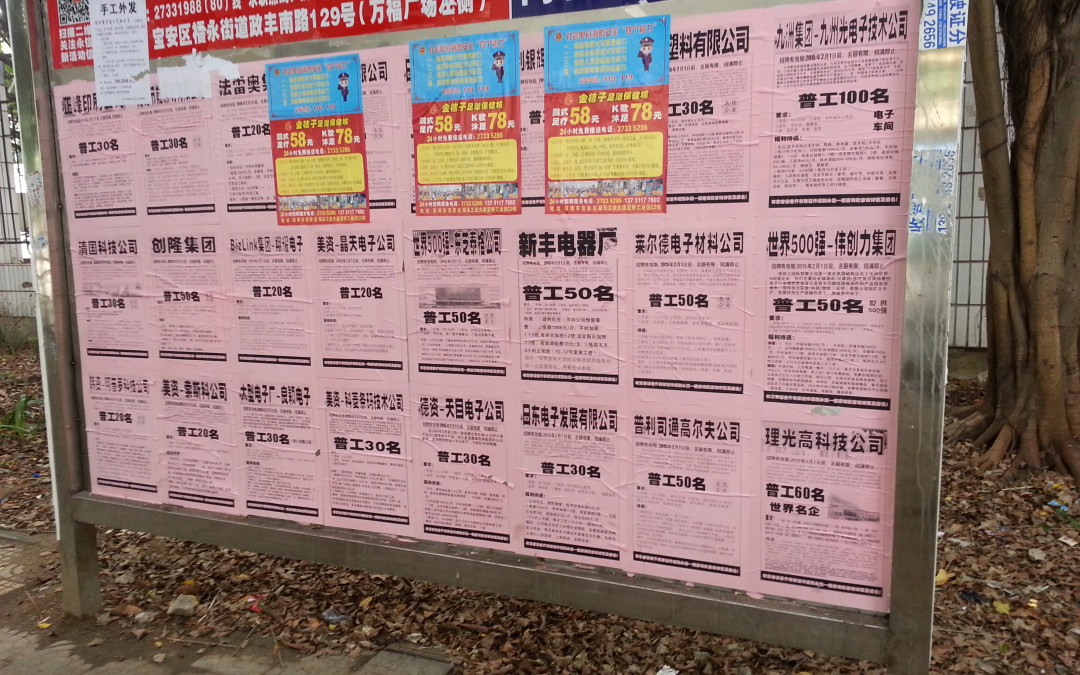 The following is part 2 of a seven part series recording a short excursion into the lives of dagongzai and dagongmei at the beginning of China’s working year. See part 1 here.

On the morning of the eighth, the hiring signs went up all throughout the district as factory HR came back to work. I headed straight for the west side, where the smaller factories are collected into “industrial parks” housing dozens behind one set of gates and one crew of security guards. Sometimes, individual factories have another set of gates and security guards marking off their plot within these complexes, but many do not. I first dropped in on this smoggy Shenzhen day at the Blue Sky industrial park, where the security guards told me it was still too early, and that it might be later in the day or the next day that hiring would start. On the notice board, there was a single lonesome notice for a water pipe factory, but I couldn’t find their hiring department. So I moved on to the next industrial park.

Just before 8, the streets had started to fill with workers. This was still far from Shenzhen’s real get-to-work rush hour, since many people had quit their jobs before the Spring Festival in order to be able to stay home longer and would not come back until several weeks later to find new jobs. Even those who keep their jobs often use all the personal leave they can get to extend their one chance a year to go home. So the 8th, as only the first few factories got back to work, had nowhere near the normal flood of people. Still, the streets were a lot busier than a few days previously, and the first vendors had started to come back, hawking their noodles and greasy breakfast goods in the middle of the street. There were also clusters of people around hiring signs up and down the street, asking recruiters (proper recruiters now and not just the middlemen) about factory overtime and benefits. Everybody was looking for more overtime and more bonuses—skill bonuses, heat bonuses (working under high heat); one place even had married couple bonuses (100 yuan each for the married couple). Meanwhile, every factory advertises: “our wages are rising to 2,030 yuan [per month],” “all our wages and conditions are according to labor law.” This is manifestly false if you know the labor law and ask a few questions about their social security and overtime. Shenzhen’s labor law mandates no more than 3 hours of overtime per day. Several factories advertised 4 hours, while at the same time assuring me of their “according to labor law” conditions. Of course, even knowing the labor law, this would be of no concern to most job seekers. The more overtime the better. It means more wages to send home, more personal spending money, more savings. In any case, people seem to agree, there’s not much to do in this area. Aside from work.

Shenzhen’s minimum wage goes up to 2,030 yuan per month this year. What is not advertised is how factories intend to deal with this. It’s true that many factories have slim margins in the dog eat dog environment of Shenzhen where everyone subcontracts for somebody else, and the numbers of bosses taking cuts are mind-boggling; but more importantly, no factory wants to see its profits cut. That means that in some cases, like in the factory I would end up working in, bosses find ways to get around minimum wage increases. Usually, this means cutting your overtime and increasing your work intensity. At my factory the general manager would assure us: Yes, of course we are raising the base wage to 2,030 yuan per month. But no! That does not mean your monthly salary goes up. Pay deductions according to production standards. Meet the production standards and get full wages, miss them, and get wages cut by whatever percentage you are short of the production target. And this very illegal, but also just fucked up, method of dealing with Shenzhen’s mandated minimum wage increase was surely not just a quirk of my factory.

Returning to the job hunt, my application (or in one case, verbal inquiry) was accepted at four different factories. A plastics factory, an electronic cables factory, a metals factory, and a tiny cell phone workshop that had less than ten workers. The recruitment table of the latter was the only table I saw that offered candy and bottles of water. I took the first two jobs, despite the candy.

The metals factory was in an industrial park, with a tiny A4 paper notice taped outside, also alone on an otherwise empty message board. Their office was on the fourth floor of an obscure building, at the end of a long hall reeking of chemicals, through whose grimy windows you could see workers dipping metal cages into vats of chemicals, or using hand tools to affix things to large metal frames. The building resonated with the sound of clinking metal. In the office, which smelt of cigarettes, a middle-aged man looked at me dumbly as I walked in the door. You’re hiring? I asked. He nodded. I’m applying, I felt it necessary to inform him. I explained the ID situation. He nodded, and handed me a pad of application forms. I filled one out, handed it to him, and he told me to report at 8am the next morning. As I walked back down the narrow hallway, skidding on the wet floor, a grey-haired man in his blue work suit looked at me . I’m here for a job, I replied, and stared at me in disbelief. The workers at this factory were all either men, or women over 40. This was not a place that young girls came to work.

The tiny cell phone factory was the kind of highly illegal workshop that often have the worst work injuries. This one did a little bit of cell phone assembly, and two dagongzai 1 sat on tiny stools behind the recruitment table. When I walked up to the table, they didn’t pay much attention, remaining glued to their cell phones. I had to disturb them in the middle of their game. They were doing the kind of work I wanted to do most: cell phone assembly. They had me fill out a form, and I asked when I could start work. Just come back in the afternoon, one said nonchalantly. When I asked what time, I was told: whenever. Asking about the dorms, they explained that the female dorm was empty. They had only 6 workers total, all men.

That night, I reported to work at the plastics factory.