Class and class struggle in China

Contours of the class struggle in China Socialist Worker, April 22

“Since the 2008 and the spread of the global economic crisis, China has experienced a sharp rise in class struggle, both in Hong Kong and on the mainland. Ellen David Friedman, a long-time organizer of the National Education Association in Vermont, founding member of the state’s Progressive Party and member of the Labor Notes Policy Committee, has been working for the last decade with labor and union activists in Hong Kong and the mainland. She spoke with Ashley Smith about the dynamics and nature of these struggles.”

“Labor disputes continued to swell in China over the first three months of this year, government data showed Friday, as slowing growth in the world’s second-largest economy puts more pressure on workers.

“Roughly 190,300 labor-arbitration cases were filed from January to March, up 16.8% from the same period a year earlier, said Li Zhong, a spokesman for the Ministry of Human Resources and Social Security, in a news briefing. Those cases involved some 275,600 people, up 24.8% from a year earlier, he added.”

“China has a job market mismatch. Agriculture jobs have been declining for years, the result of urbanization and the country’s continuing economic transformation. And China’s huge manufacturing sector is showing new signs of stress, as some companies struggle with rising debt and rampant overcapacity.

“But workers are not easily making the switch. Unskilled or semiskilled workers like Mr. Wang can be a bit choosier now as growth of the pool of migrant workers slows. At the same time, soaring university enrollment means new graduates often struggle to find the high-paying white-collar jobs they were expecting.” “A Chinese manufacturing gauge fell to a 12- month low in April, suggesting government efforts to cushion a slowdown are yet to revive the nation’s factories…. The first reading of the economy’s health in April may deepen concern over a slowdown after first-quarter data showed the weakest economic expansion since 2009. Policy makers have stepped up efforts to halt the slide, cutting banks’ reserve requirements by 1 percentage point this week.”

China and the Asian tigers are going to hit a massive economic roadblock next year — and there’s no solution Business Insider, April 23

Often left out of discussions on the slowdown in the Chinese economy is the crucial problem of the demographic shift China is undergoing, and undergoing at a much more rapid rate than has been true of other developing nations. This is a key issue to watch going forward.

“The Asian tiger economies that boomed during the second half of the 20th century are about to hit a major constraint on their growth. They’re going to see something that is more common in southern Europe and that has long bothered Japan. The growth of the normal “working age” category (usually people who are ages 15 to 64) will turn negative in 2016. Though China is not strictly one of the four Asian tigers (Hong Kong, Taiwan, South Korea, and Singapore), it faces the same problem at an earlier stage of development, reaping the consequences of the one-child policy.”

Debt continues to rise and the state’s response is shifting, allowing companies, including, for the first time, a state-owned enterprise, to fail:

“Chinese banks face a spike in bad loans amid slowing economic growth…. Slowing growth in the world’s second largest economy prompted the People’s Bank of China (PBoC) to stimulate lending, but that has seen the quality of loans deteriorate.”

“China’s home builders became the single biggest source of dollar junk debt in Asia amid government measures to prevent a property bubble. Developers already funneled $78.8 billion from international equity and bond markets into an industry that’s grown to account for one third of the world’s second-biggest economy. Most of the first rush of dollar offerings, in 2010, falls due in the next two years.”

“China’s Baoding Tianwei Baobian Electric just became the first state-owned business to default on onshore Chinese debt according to Reuters — that’s a bad news landmark for China’s economy, which is struggling to cope with a slowdown in growth.” This is a sign of China’s weakening economy, for which, due to high debt, many firms are not able to endure. But it is also a sign of a new stage in the state’s reforms, showing the state is no longer willing to back up all state owned industries.

Defaults are the best medicine for China CNN Money, April 22

“When struggling companies could no longer pay the bills, a white knight of one variety or another would always appear. Typically it was the local government, riding in to offer last-minute loans that would keep moribund businesses going. But those days appear to be over. Already this week, property developer Kaisa, and state-owned Baoding Tianwei Group, a power transformer manufacturer, have failed to make payments to creditors. No bailouts have materialized. And that’s a really good thing.”

“Chinese power-equipment maker Baoding Tianwei Group made history this week, becoming the first-ever Chinese government-owned company to default on its debt. The news came just one day after another milestone, in which Kaisa Group Holdings became the first Chinese real-estate developer to default on a U.S.-dollar-denominated bond. But it was the Tianwei case that holds far greater implications for Chinese markets: State-owned enterprises (SOEs) such as Tianwei are traditionally seen as enjoying implicit government support and therefore possess lower default risks. The news has stoked concerns about rising credit risk in the country, with analysts now warning of more defaults to come, and even the likelihood of a major credit crunch.” More on Kaisa: Kaisa’s fall wakes investors China’s property debt debacle AFR Weekend, April 23

The Chinese state has been pushing people to invest in the stock market for over a year now, leading to an 80% rise in just six months. “China’s bull market “has just begun”, a website run by the official People’s Daily newspaper said, calling the surge in share prices a fair reflection of the country’s growth potential and denying that it was a bubble.” “A rally in stock prices to seven-year highs in mainland China has lifted the number of Chinese billionaires and billionaire families to a record 400, according to estimates by Forbes. That’s an increase from the then-record 242 that we identified on the Forbes China Rich List published last October, and adds to the country’s standing as home to one of the largest collections of rich individuals.”

“Chinese President and Communist Party (CPC) chief Xi Jinping is set to meet the chairman of Taiwan’s ruling Kuomintang (KMT) in May, officials announced Friday. It will be the first meeting between the heads of the two parties. The leaders are expected to exchange views on CPC-KMT relations during the meeting, Ma Xiaoguang, spokesman of the Taiwan Work Office of the CPC Central Committee told Xinhua…. Economic ties between China and Taiwan have improved to their best level in decades since President Ma Ying-jeou took office in 2008, but an underlying political conflict remains.”

China’s Yuan Keep Getting Bigger, But Dollar Not Giving Up The Throne Forbes, April 23

“The biggest stumbling block to the yuan becoming a truly global currency is Beijing and the U.S. Congress. Beijing isn’t exactly ready to let the yuan become a full blown free floating currency. China is still taking baby steps into capitalism. Then there is Washington. The U.S. Congress, led by Republicans, is not fond of including the yuan in the International Monetary Fund’s Special Drawing Rights.”

The spirit of Bandung The Star, April 24

“Asian-African Legal Consultative Organisation was born at a historic moment, but struggles to deal with the present day issues. LAST week, the Asian-African Legal Consultative Organisation (AALCO) held its annual session in the Chinese capital of Beijing. Here’s a bit of the organisation’s background – with a focus on international law and legal matters of common concern, AALCO is the legacy of the Bandung Conference.”

This chart shows why China thinks it can take over the South China Sea without triggering a war Business Insider, April 20

Why is China so confident about its control over the South China Sea? “It just has far more ships and resources than any of its immediate rivals.” “Iran is seeking to extend its energy delivery network to China under Beijing’s massive “One Belt, One Road” push to boost regional connectivity, Tehran’s envoy has said.”

“Myanmar’s political transition has spawned debates and deliberations in policymaking circles and strategic communities across the world. The economic and strategic spinoff of the political changes has generated immense attention and interest. Not least in China.” 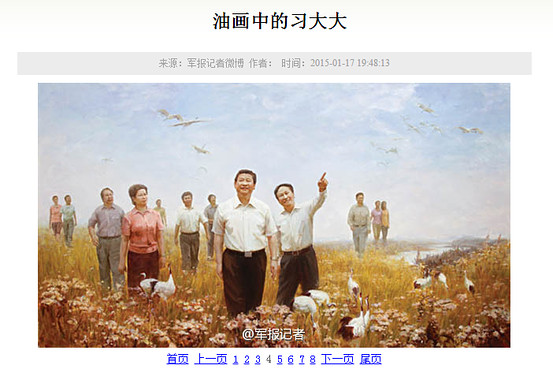 A screen shot shows one of several oil paintings of Xi Jinping unveiled on the website of the country’s defense ministry in mid-January. Source: http://blogs.wsj.com/chinarealtime/2015/01/26/chinas-xi-builds-support-for-big-move-putting-politics-ahead-of-the-economy/?mg=blogs-wsj&url=http%253A%252F%252Fblogs.wsj.com%252Fchinarealtime%252F2015%252F01%252F26%252Fchinas-xi-builds-support-for-big-move-putting-politics-ahead-of-the-economy

“Xi Jinping is a strong and ambitious leader, and he is taking on huge challenges, staking his reputation on a major transformation of the economy from an export-led, state-investment-driven model to a more sustainable, consumer-led one. Overhauling the $10 trillion economy is an enormous task. At the same time, he is starting to tackle the municipal debt problem that has led to valid concerns. I believe the government has the tools it needs to avoid crisis, but the longer the leaders wait on major reforms, the greater the risk that there might be serious disruptions.”

Party’s over: China authorities crack down on funeral stripping The Guardian, April 23

“China is cracking down on funeral strippers after controversy over “obscene” performances in the east of the country.”

“A team of Chinese scientists have successfully edited human DNA in an embryo for the first time, winning support at home but prompting controversy in the West.”

“With some noticeable exceptions, China’s most visible Neo-Confucian advocates have, in recent years, often displayed a fairly strong affinity for leftist socioeconomic positions. Correspondingly, a number of prominent leftist intellectuals have argued for ideological continuity between Confucianism and Chinese Socialism, or, to quote the prominent Sun Yat-sen University scholar Gan Yang, “tong san tong” (“connecting the three canons”). It is hard to escape the impression that there has been a budding relationship between “cultural conservatism”—or, at least, the Confucianism-oriented version discussed in the Pan and Xu paper—and the Chinese Left.”